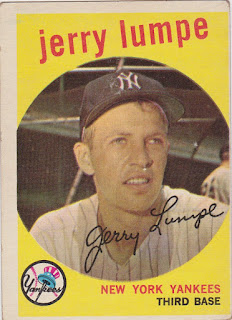 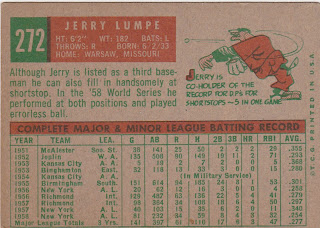 Jerry Lumpe (one of the better names in the set, no doubt) signed as a Yankee prospect in 1951 and put together some good numbers as he progressed up the ladder before his 1956 debut. He saw part-time duty at third and short for their pennant winning clubs in 1957 & 1958. Not so surprisingly he was traded to the A's early in 1959 in a deal that brought Hector Lopez and Ralph Terry to New York. Just another in the seemingly endless string of NY/KC deals.

The A's installed Lumpe as their starting second-baseman and in 1962 he hit .301 with ten homers and 83 RBI. He got a few MVP votes that season. Unsung though he was, Lumpe nonetheless established himself as a fine fielder and a decent hitter for a half dozen seasons. He held down 2nd base (and hit pretty well) until a trade to the Tigers in 1964. In '64 he made his only All Star squad in a year that saw him put up his lowest batting average in six seasons.

After a couple more years in Detroit he career wound down and in 1967 the Tigers moved Dick McAullife over to second and Lumpe saw little time. He retired after being released in October of that year.

Lumpe coached for the A's for a bit after his playing days. His native Warsaw, Missouri has a Lumpe Field named in his honor. He is the subject of one of Casey Stengel's more memorable quotes:  "There's Lumpe. He's a great hitter until I play him."

Lumpe poses next to the batting cage in Yankee Stadium for this shot which ended up on my seriously mis-cut copy of his card.
Posted by Commishbob at 9:11 AM