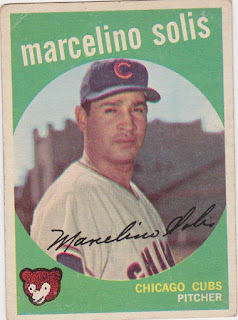 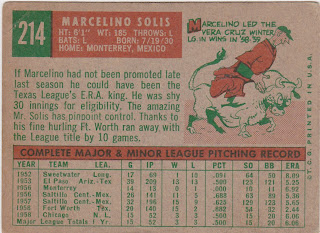 Marcelino Solis, a native of Mexico, spent 13 seasons playing professional baseball. nearly all of that time came in the Mexican League and in the Cubs farm system. A lefty starter, he was drafted and signed  by the Cubs in December of 1957 as a 26 year old with a very uneven record at several levels of Mexican baseball.

He spent the 1958 season with the Cubs' AA club in Fort Worth and went 15-2, a mark that had to surprise Cub officials given that he had never shown anything approaching that skill level. That led to a half season in Chicago in 1958 where he went 3-3 in 15 games including four starts. With a ERA over 6.00 it's not particularly surprising that he never again pitched in the big league.

A couple of thing that struck me. 'Marcelino' isn't all that common a name. I've been at a heavily Hispanic school for 25 years and can't recall a single 'Marcelino'. But I do know of one other in baseball. Marcelino Lopez was one of my favorite players from the Orioles 'glory days' of three straight World Series trips. He was a Cuban-born middle reliever and spot starter who had a small but boisterous fan club that invaded Yankee Stadium when the O's were in town. The little group carried a banner all around the stadium, seemingly never sitting down in their seats.

And check out the write-up on the back of this card. Topps calls him "the amazing Mr. Solis". Yes he had a nice '58 season but I think the copywriter was just filling space.

And finally... there is even less info on Solis on the web than I thought. Just page after page of the usual junk links to stat sites that mooch off Baseball Reference and link to eBay listing of this card. But I did find a pretty neat picture of him in his Ft. Worth Cats gear and bearing a serious resemblance to the uber creepy Henry Silva from the original Manchurian Candidate.  Enjoy. 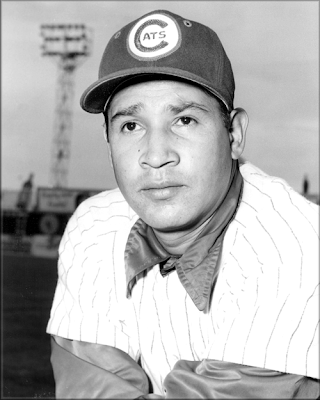