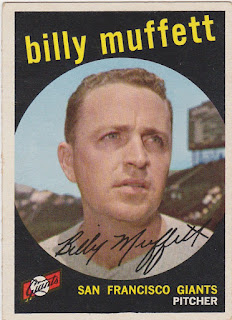 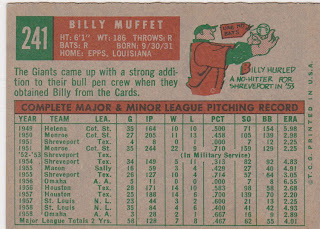 Billy Muffett's mark on the game wasn't made during his long minor league career or even his six seasons (or parts thereof) in the majors. Muffett was far more accomplished as a major league pitching coach than he was as a hard throwing but control challenged righty.
Signed by the Cubs in 1955 after a few seasons of independent minor league baseball and a couple of years in the service, Muffett was traded and debuted with the Cardinals in August of 1957. He had perhaps his best string of major league pitching that season but he also suffered his most inglorious moment when he allowed a homer to Hank Aaron in the bottom of the 11th in Milwaukee on September 23rd. That blast was the shot that clinched the pennant for the Braves.
Muffett pitched for the Cards again in 1958 and then the Giants in '59. He was traded to the Red Sox for 1960 and they turned him into a starter. He split two of the next three seasons between the Sox and the minors. 1962 was his only full season of MLB service. He finished with time in the Yankee and Cardinal chains.
After retiring as a player Muffett interned as a minor league pitching coach for a season in Tulsa. Then he became the Cardinals' pitching coach before moving on to the Angels and finally the Tigers under Sparky Anderson. He worked with Anderson for 10 mostly successful seasons and they both retired after the 1994 season. Muffett died in 2008.
The black frame surrounds Muffett's pensive skyward gaze. Topps liked this look.