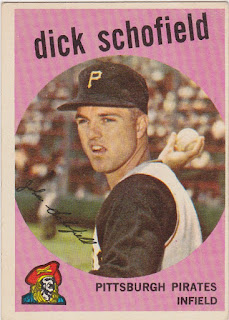 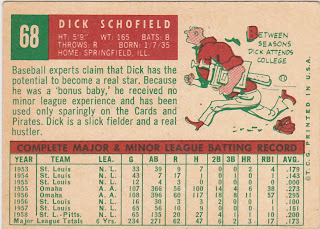 The first of a three generation baseball family, Dick 'Ducky' Schofield began his baseball life as a 'bonus baby' with the St. Louis Cardinals and as such spent the 1953 and 1954 seasons languishing on the Cards' bench. After playing most of the next two seasons in the minors Schofield became the Cards utility infielder before being dealt to the Pirates in 1958.

He played a key role in the Bucs' 1960 pennant run when he filled in admirably for  Dick Groat at shortstop in September after the soon-to-be MVP was sidelined with a broken wrist. Schofield hit .400 in his sub role but with Groat back for the World Series Schofield was back to being a bench rider. He did get a championship ring for his troubles, though. His .333 average for the year, even as a part timer, was easily his best ever.

He was handed the full time shortstop job for a couple of seasons in Pittsburgh and hit .246 in both '63 and '64. He was dealt to the Giants in 1965 and started most of that season as well. After that he was shuffled around the majors never again playing full time. After runs with the Dodgers, Yanks, Red Sox and twice more with the Cardinals he ended his career with the Brewers in 1971.

His son, also named Dick Schofield, had a long career in the 80s and 90s, mostly with the Angels. Grandson Jason Werth is a current Washington National.

Interesting interview with Ducky Schofield appeared in a St. Louis paper a few years back. Schofield has some strong opinions on the game today and the article explains the intricate Schofield/Werth family tree which is chock full of athletes and athletic accomplishments. His granddaughter played volleyball for the Nebraska Cornhuskers and was a team standout.

This is a Seals Stadium shot. And it has a pink frame. I like action cards, even the 'posed' action cards. Seems like I've had a ton of portrait cards lately.