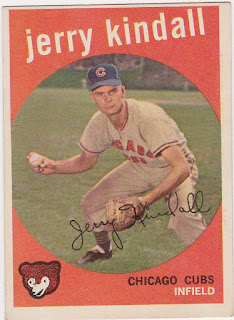 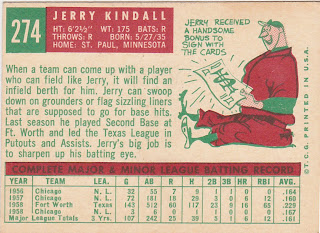 Here is another card of a Chicago Cub. Seems they have come up a lot lately. Jerry Kindall signed as a 'bonus baby' with the Cubs in 1956 fresh off a College World Series championship with the U of Minnesota. He spent the minimum mandated by rule two seasons on the big league roster playing sparingly, mostly as a pinch runner and defensive replacement although he did get nearly 200 at bats in 1957.

He spent the next two season mostly in the minors before returning to the Cubs as a platoon infielder in 1960. He was traded to Cleveland and in 1962 and he was the Indians regular second baseman. That must have soothed the pain of thinking he was about to get the Cubs regular shortstop job as Ernie Banks was being moved to first. That year in Cleveland was his only year as a full time player. He hit .232 but managed 13 homers for the Tribe. He also led the league in assists and 'total zone runs'. I have no idea what that latter stat means but it sounds like something Adrian Peterson might excel in.

A three way deal sent Kindall to the Twins for 1964 and he had again captured a starting slot in '65 until getting hurt late in June. Healthy by World Series time Kindall had to sit and watch as Frank Quillici, who had taken his spot and done well, played every inning of the Series against the Dodgers. He was released at the end of spring training the next spring and went to work coaching at his alma mater.

He went on to coach at the University of Arizona from 1973 through 1996 winning 860 games and three NCAA crowns. 209 of his players signed big league contracts, 34 received All American honors and 32 went on to play in the majors. Among those are Trevor Hoffman, Kenny Lofton and Terry Francona. Kindall is also a well respected author of baseball instructional books.

His long, successful and influential coaching career led to many awards, some of which are written about in this interview. Even better is the comprehensive article on him found on the SABR site. More on his coaching days here.

I found very little on Marcelino Solis on the net but the opposite is true on his major and minor league  teammate Jerry Kindall. And a lot of it was very interesting stuff. But even more interesting, to me at least, is the uniform that Kindall wears in this card. Somewhat hidden but definitely there is the C-U-B-S included on the front of the clubs road jersey. Using both city and nickname on a uniform is pretty unique, at least in the modern history of the game. Even better is the cap featuring red piping. This uni/cap combo marks this photo as being from 1957. The only other club that used cap piping that I recall seeing was the Senators of the mid-60's.

Here is the teams' 1957 uni set from Dressed to the Nines on the Baseball Hall of Fame site.

Lastly the card back bears a cartoon reflecting the fact that Kindall signed a 'handsome' bonus. But the team cited is the Cards. Nope, as we've seen, it was the Cubs. Uncorrected error. 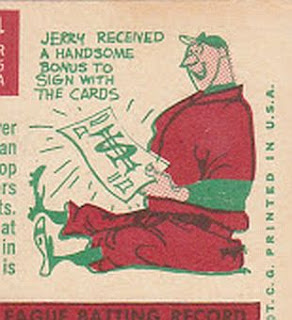