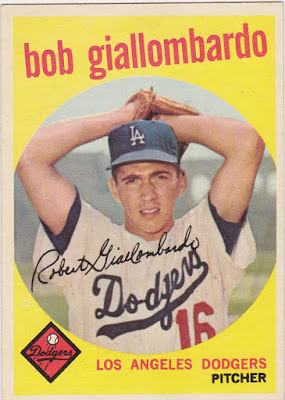 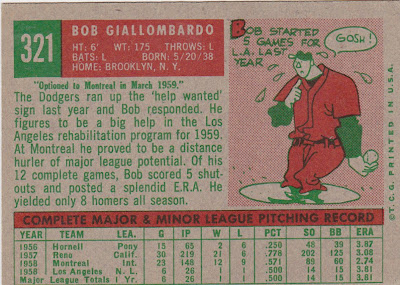 Quick quiz: Name a player who was a hard throwing lefthanded pitcher out of Brooklyn's Lafayette High School who was signed by the Dodgers in the mid 1950s. If you said "Sandy Koufax" you'd be right. If you said "Bob Giallombardo" you'd also be right (and you'd be looked at strangely).

Giallombardo was indeed a schoolmate of Koufax at Lafayette. But the two were never on the same staff due to what the coaches considered Giallombardo 'not being ready'. The story, and a whole lot more about this interesting player, can be found in this examiner.com article.

In that article Giallombardo discusses the shoulder injury he incurred in winter ball following the '58 season that cost him a lot of his arm strength and essentially finished his chances as a major leaguer. His big league career consisted of five starts and a relief appearance in a months time in the middle of the '58 season. The highlight was his only big league win in the second game of a doubleheader in the L.A. Coliseum on July 13th against the Reds. Giallombardo pitched into the ninth and yielded to Clem Labine for the final two outs in a 3-2 win.

Giallombardo had an interesting life after baseball managing the Gil Hodges Bowling Lanes in Brooklyn, selling insurance, and as a supervisor of roofers for the New York Housing Authority for twenty years. He then retired to Waxhaw, a small village some 20 miles south of Charlotte, NC to be near his daughter and her family.

The yellow framed cards of Dodgers taken in the Coliseum combining the sharp home duds and Dodger logo to produce some sweet visuals. This one is no different. The 'optioned' notation on the reverse is a variation. It's more common than the #321s without it. I have both but the other one, the one without the 'optioned' line is in poor condition.