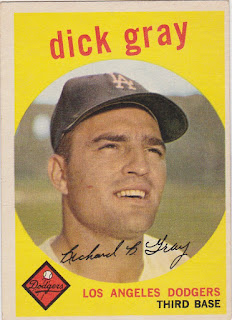 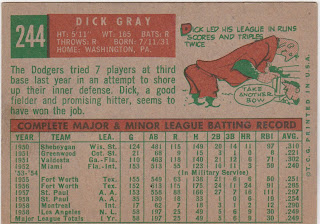 Infielder Dick Gray signed with the Brooklyn Dodgers in 1950 and began a long climb to the big leagues with a military service detour during the Korean Conflict. He debuted in 1958 as a 27 year old rookie with the newly transferred Los Angeles Dodgers as their opening day third baseman. In the second game of the season he became the first Los Angeles Dodger to hit a homer (or collect an RBI for that matter... they'd been shutout on Opening Day). Two days later be became the first Dodger to hit a home run in the city of Los Angeles. The Giants' Hank Sauer had become the first major leaguer to homer there earlier in the game.

Gray ended up splitting that season between the Dodgers and the minors. He returned to the bigs for 1959 but was traded to the St. Louis in June so he missed out on the Dodgers' title run that year. He stayed with the Cardinals until may of 1960 when he was dealt to Pittsburgh but he never made it out of their chain and retired in 1962. Looking back a few posts it appears Gray followed the same Dodgers-->Cardinals-->Pirates trail blazed by Gino Cimoli in the 1958 thru 1960 seasons. But all the moves look to be separate transactions.

Gray had a career .239 average in 124 games with a dozen homers. He worked for the Buena Park, California school system after his baseball days.