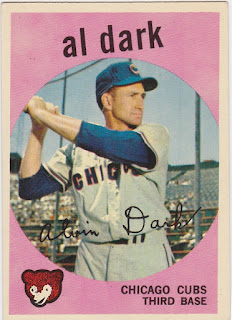 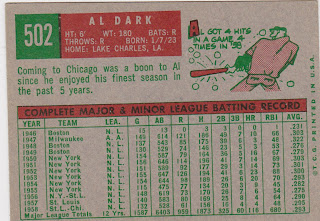 Alvin Dark played for 14 seasons in the majors beginning in 1946 and ending with his retirement as a player in 1960. His whole playing career was a a National Leaguer. Along the way he played every spot on the diamond except behind the plate. He even pitched a inning in 1953.

Coming up with the Boston Braves he was the NL's Rookie of the year in 1948 and finished third in the MVP balloting. That season he batted .322 and was 4th in the league in that category. He played for the Braves in the Series that year. Heady stuff for a rookie. After his average slipped to the .270s in 1949 the Braves dealt him to the Giants where he continued his outstanding play in the field and at the plate. He made three All Star games with the Giants.

After six seasons with the Giants, and having helped them win a World Series title in 1954, Dark was traded to the Cardinals early in the 1956 season and he stayed there for a year and a half before being moved on to the Cubs during the '58 season. He split the 1960 season between the Phils and Braves and it was the first year in 13 seasons that he wasn't a full time player.

After retirement as a player he began a long and largely successful career as a manager starting with the Giants with whom he went to the Series in 1962. After stints with the Kansas City A's and Indians he managed the Oakland A's to the 1974 World Championship.

Dark had been a highly successful three sport college athlete at LSU and had served in the Marines in WWII. His SABR entry contains some interesting stories of his days prior to MLB fame.

Dark appears in Cubs' road gear on this pink framed '59 card. He joined the Cubs during the previous season. It appears to have been taken in Seals Stadium in San Francisco as were several other Cub cards I've shown. A little research shows that the photo was taken on one of the three trips the Cubs took out west after the trade was made.
Posted by Commishbob at 7:00 AM