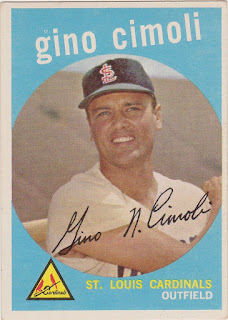 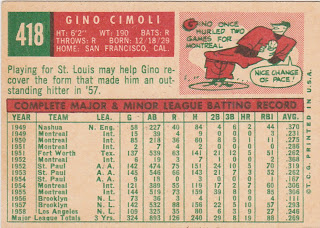 Gino Cimoli was a ballplayer of Italian decent out of the San Francisco Bay area. So was Joe DiMaggio. And although Cimoli had a nice career the comparison stops there. After signing with the Dodgers in 1949 he spent about half a decade in their chain putting up good numbers for the most part but unable to crack the star laden major league roster. Of course getting to play four seasons in Montreal, one of the world's greatest cities (IMHO) isn't a bad way to enjoy your minor league time.

According to at least one blog Cimoli, who had garnered a reputation for being a hothead who didn't work very hard, apparently received a jolt when his wife and kids were involved in a car wreck in 1955. He made the Dodgers in 1956 but was used sparingly before he grabbed a regular outfield slot in 1957.  That year he made the NL All Star team while hitting .293 with 10 dingers.

In 1958 he found himself with the Dodgers in LA and he became the first major league hitter to bat with a West Coast team. The Dodgers opened that first season in California against the Giants at Seals Stadium in San Francisco. Cimoli struck out against the Giants' Ruben Gomez to lead off the game.

He was traded to the Cards for 1959 (he missed the Dodgers' World Series season) and then on to the Pirates for 1960 where he won himself a championship while being used as the 4th outfielder. During the '61 season Cimoli was dealt to the Braves and he went on to play for the A's, Orioles and Angels before retiring after 1965. In 1962 he had led the AL in triples. After his retirement from baseball he drove for more than two decades for UPS.

Looks like Cimoli had a Cards' cap logo airbrushed on for this card. It's a pic taken at the LA Coliseum and the Dodger lettering on his jersey can be seen peeking out. Nice card anyway. Blue Cardinal cards are pretty sweet.