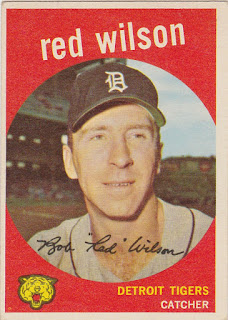 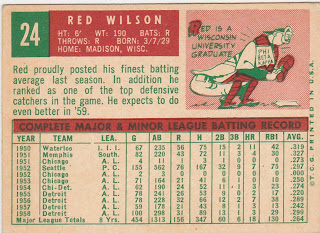 Robert "Red" Wilson is another of the multi-sport standouts who chose a baseball career. As a star football player out of the University of Wisconsin Wilson was drafted by Paul Brown's Cleveland Browns in 1950 but opted to sign with the White Sox instead.

After three seasons in the Sox chain during which he displayed a fine batting stroke (he hit .290 or better each season) he made the club in 1953 as a platoon catcher. Wilson was traded to Detroit in 1954 and that's where he spent the bulk of his career. He never became an everyday starter but split time during six seasons in Detroit while becoming Frank Lary's 'personal catcher'.

Together they were a Yankee Killing duo. In 21 starts together against the Bombers Lary went 16-3 while Wilson hit .354. Quite impressive from a guy who had a .258 lifetime average.

During his Tiger days Wilson had some nice moments. He .299 in 1958 going hitless in the season's final game to slip under .300. And he was behind the plate for Jim Bunning's no hitter that same season.

Wilson hung on in his role as a platoon option until he was traded to the Indians in July of his final season, 1960. He worked for several decades as a bank loan officer and president. He has an extensive bio on the SABR site.

Like so many other cards of Tiger players in the '59 set Wilson poses inside a red frame. Even more common is the Yankee Stadium background.