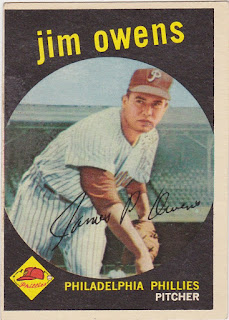 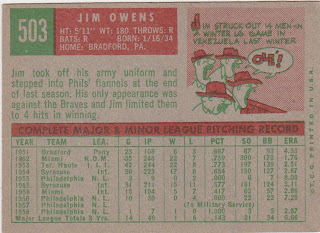 Jim Owens' major league career covered 12 years and three National League teams. After some outstanding minor league seasons, a couple of looks in a big league uni and nearly two full seasons in the military Owens latched on to a job in the Phils' rotation in 1959.

That season turned out to be his best as he went 12-12 in 31 starts and compiled a 3.21 ERA. His numbers quickly fell off in subsequent years and after three seasons of getting shelled the Phils gave up on Owens and shipped him to Cincinnati for 1963. He briefly held the record for most balks in and inning (three!) which he set in an April game in '63. The mark lasted only until Bob Shaw tied it with three in an inning on May 4 and a total of five balks in the game. Owens split that year between the Reds' bullpen and the minors and was then drafted via Rule Five by the Astros.

He saved 16 games out of the Astros' pen over four seasons before calling it a career in the middle of the 1967 campaign. He served as Houston's pitching coach from then until 1972.

Research note.... shockingly not everything you read on the internet is true. Owens' BR Bullpen page states that Shaw broke Owens' record with five balks in an inning. Yet the game page shows it was three and a total of five in the game.

I have stated my love for the black framed cards in this set before. Owens 'all business' look is a good one here in the paint retouched photo. And you have to love Topps' back of the card write-up spin on his one inning of work in 1958. He 'limited' the Braves to four hits in that inning. Correction thanks to a comment. It was four hits in 'winning' not 'inning'.
Posted by Commishbob at 5:00 AM