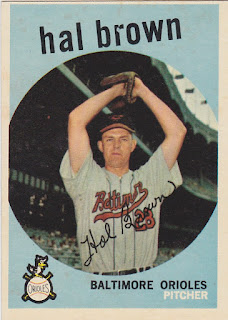 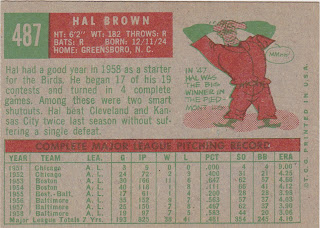 I don't think I ever once heard of him referred to as anything other than Hal 'Skinny' Brown. At least that I recall. Even the always proper Red Barber called him that on the radio.

Anyway here he is posing in Yankee Stadium... what a unique concept. He actually found himself pitching in a Yankee uniform in two games late in the 1962 season. That was close to the end of the line for Brown who had begun his career as a Red Sox signee in 1946 following a two year service hitch. He pitched for the White Sox in 1951/52 and found his way back to the Red Sox in 1953. The transactions that got him to that point are a jumbled mess that I really didn't care to follow.

But it was after a 1955 trade to the Orioles that Brown's career took flight (pun intended). He held a spot in the Orioles rotation until that trade to the Yanks late in '62. Along the way he had been the grand old man as part of the Orioles 1960 'Baby Birds' rotation. At thirty five he was a decade and a half older than the four other starters.

He finished his career with a couple of rocky season in Houston in 1963 and 1963. The '63 campaign actually wasn't bad for Brown as his numbers were better that his 5-11 record might indicate. That's what happens when you pitch for lousy clubs. He was 85-92 with a 3.81 ERA for his career.

After his retirement he co-owned a heating and air conditioning firm in his native Greensboro N.C.
Posted by Commishbob at 6:30 AM