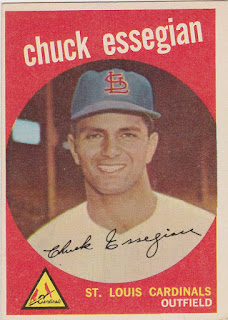 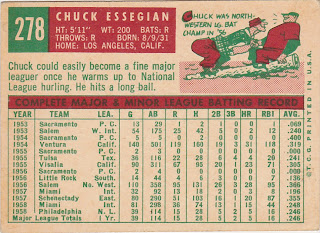 Six big league teams employed outfielder Chuck Essegian in six big league seasons. And in only one season, 1962 with the Indians, was he anything close to being a regular. But there is more to Essegian than that. He had a big moment in the sun during the 1959 World Series as a Dodger.

In that Series he pinch hit a pair of homers, the second of which came when he hit for Duke Snider. Essegian tells that story (and a lot more) in this L.A.Times article from 1995. He'd been with the Dodgers for only six weeks before that fateful Series. He had come over in a mid-season deal from the Cardinals and then was in the minors for a few months before being called up.

In a lot of the stuff I dug up on Essegian he seemed to have put baseball completely behind him once his career ended. But during his second career, as a lawyer in California, he seems to have mellowed. Again the L.A. Times relays a story about Essegian and a young fan with whom he reconnected many years later. Yet another L. A. Times article, this one from 2006, elaborates on Essegian's times with the Dodgers.

As a football player at Stanford before his baseball days Essegian played in the Rose Bowl and remains one of very few players to have appeared in that game and a World Series. Essegian's contemporary Jackie Jensen is another other as is Jackie Robinson.

As noted Essegian rarely had a full-time spot with any club but he certainly had a good year in 1962 when he knocked out 21 homers in just under 400 at bats. That was as close as he ever came to matching the power he flashed in his minor league career.

Nice portrait on Essegian on this card. The smile is in contrast to the reputation he had as a glum and dour personality. Obviously an airbrushed logo on his cap. Looks like Connie Mack Stadium behind him. He played in Philadelphia in 1958 and by blowing up the card I could barely make out pinstripes on Essegian's jersey.
Posted by Commishbob at 6:30 AM