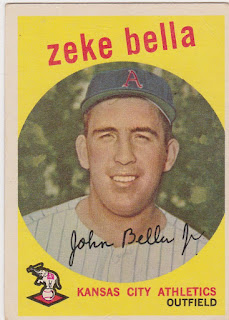 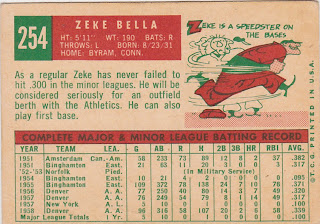 Signed off the Connecticut sandlots by the Yankees in 1951 John 'Zeke' Bella took a three year 'detour on his way up the Yankee ladder with a military stint during the Korean War. He hit over three hundred in his four full minor league season and got a ten at-bat look with the Yankees in 1957. Bella relates the story of his September call-up on his BR Bullpen page:

"The day I got called up it was raining and the game with the Indians was postponed," said Bella. "So we made it up with a day-night doubleheader the next day. The first time I went out to right field, I looked up and said to myself, "This is something."
"Late in the second game Casey Stengel said, 'Hey you with the funny first name, go up and hit.' I faced Ray Narleski and struck out."

Another .330 season in the minors in 1958 earned him a trade to the Yankees' kissin' cousins in Kansas City. 1959 was Bella's last and best shot at the majors. He hit .207 in 43 games for the A's and after another year in the minors he was out of baseball after 1960. He was a mail carrier in his home state after his baseball days.

The Greenwich Time webpage has a nice story of Bella celebrating his 80th birthday in 2010. He poses with his '59 card in the photo gallery accompanying the story. The '59 is his only card by the way. He's got an airbrushed cap and his Yankee pinstripes.

Zeke hasn't changed much. He's got the same smile! 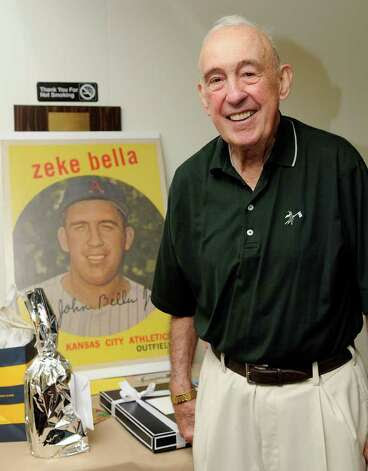