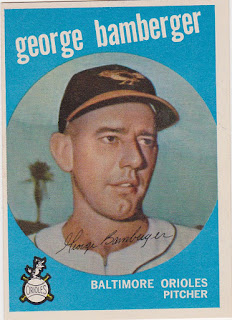 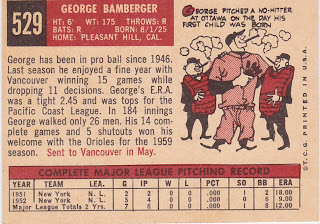 George Bamberger had over 200 minor league wins in a career that stretched from 1946 to 1963. Along the way he made a handful of major league appearances, seven games with the Giants in 1951/52 and three more in 1959 with the Orioles, the year this card was issued. Those games in 1959 were in April and as noted on the back of his card he was sent down in May. He never made it back to the big leagues as a player.

But he did spend a lot of time in big league dugouts. He started coaching in the minors in the early 60s even as his active playing career was winding down. He became the Orioles' minor league pitching instructor and the was named as pitching coach of the O's under Earl Weaver in 1968. He kept that job through some very glorious years for the Birds. The Orioles had four Cy Young winners and 18 twenty game winners during his time there.

In 1978 he left the Orioles and took the managerial job with the Milwaukee Brewers. That season he won the majors Manager of the Year award while guiding the Brewers to a 93-69 third place finish, He had another good year in '79 but suffered a heart attack in the spring of 1980 and resigned after that season.

He managed the Mets in 1982 and part of '83 and returned to Milwaukee as skipper in 1985/86. In each of those seasons his clubs were below .500. 'Bambi' died in 2004. Former Orioles and Mets GM Frank Cashen called him the best pitching coach he ever seen. From that NY Times obit:

''He was the best pitching coach I ever saw,'' Frank Cashen, the former general manager of the Orioles and the Mets, said in a telephone interview yesterday.
He recalled that Bamberger gave his pitchers plenty of work.
''He believed in a four-man rotation,'' Cashen said. ''His theory was, the arm was a muscle, and the more you used it, the better off you were, as long as you didn't abuse it.''
Cashen remembered that Orioles Manager Earl Weaver ''was very flamboyant and not afraid to take pitchers to task vocally,'' but that ''George was very quiet; he was their friend.''


I like this high number card for a number of reasons, not the least of which are appreciation for what he did as the Orioles pitching coach and the fact that the back is printed, as are all '59 high numbers, in black and red on cream colored cardboard. Plus it's in really nice shape. The palm tree gives away the fact that this was a spring training shot.

Posted by Commishbob at 7:57 PM