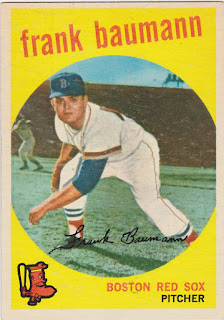 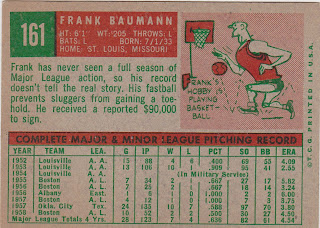 High school hotshot Frank Baumann was a much sought after pitching prospect in 1951 coming out of St. Louis. The Red Sox outbid his hometown Browns and in 1952 Baumann began a long slow climb up the ladder and he never really established himself with Boston. He'd get a look nearly every season with the big club but never stuck until 1959 when he got 10 starts and 26 overall appearances.

He was traded to the White Sox for the 1960 season and his career bloomed with a 13-6 record and a 2.67 ERA which led the league. He got 20 starts that year and had 7 complete games and three shutouts. That was easily his best season and he went 10-13 in 1961 as his numbers slid downhill after that. He allowed the most earned runs in the league in 1962, double the number he allowed in '61 in nearly the same number of innings. He made a very brief stop with the Cubs in 1965 and called it a career. Baumann posted a 45–38 record with a 3.90 ERA and 13 saves in 244 games pitched in 11 seasons (or parts thereof).

Bob Lemke had a nice post about Baumann which you can read here. Full of background info you may find interesting.

This is one of those retouched pictures that show up in the 1959 set.  Hard to say where the original was taken.