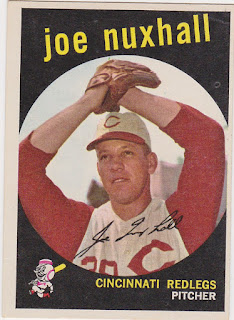 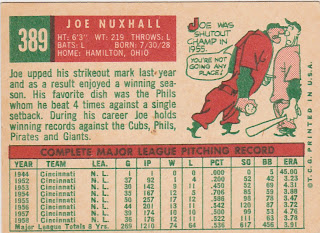 Joe Nuxhall made his major league debut with the Reds on June 10th of 1944. At the age of 15! He became the youngest player in modern baseball history to appear in a game. He's been signed the year before by scouts who were looking at his father as a wartime player. Joe's Dad turned down an contract offer but the then 14 year old was signed instead.

In that debut game Nuxhall entered with his club behind 13-0 to the Cardinals in the ninth and was cuffed around pretty good before being taken out. But despite that it was a pretty remarkable event. Consider this quote from Nuxhall BR.com Bullpen page:


"Probably two weeks prior to that, I was pitching against seventh, eighth and ninth graders, kids 13 and 14 years old. All of a sudden, I look up and there's Stan Musial . . ." - Joe Nuxhall, about his first game as a 15-year-old major leaguer

Following that debut Nuxhall did what 15 year old major leaguers have always done... he went to high school. Nuxhall then spent about eight years in the minors and returned to the Reds in 1952. By 1954 he had established himself as a fixture in the rotation and he went 12-5. Over the six seasons he held a spot as a Reds starter he was 73-58. His best seasons came in '55-'56 when he was chosen for the All Star squads in the NL.

Nuxhall saw his numbers and innings go south in 1960 and he was traded to the A's for the 1961 season. After the A's released him he signed briefly with the Orioles and then the Angels appearing in 5 games for the Halos early in 1962. Released again the Reds took him back and in June of 1962 he began a second tern in Cincy and his career rebounded. He won 15 games in 1963 and 11 in 1965 before he retired after the '66 season. Ironically Nuxhall, who pitched in 15 seasons for the Reds was gone the only year, 1961, that they went to the World Series.

After retirement Nuxhall remained a fixture with the Reds as a broadcaster from 1967 through 2004, He was also their batting practice pitcher for more than 20 years. Nuxhall, a much beloved figure in Ohio (he was a Hamilton native) died in 2007.

Great stuff about Joe Nuxhall can be found all over the net. His NY Times obit is here. One from ESPN is here. But the best resourse is a page dedicated to him on the Reds MLB site. Lots of pics, tributes and info. Check it out.

The website for the Joe Nuxhall Miracle League fields is here. It's a complex that provides baseball/softball diamonds specially tailored for use by kids with disabilities.

Once again I'm struck by the greatness of these black framed Reds cards. The color combo just seems right. Looks like Nuxhall has his road uni on in this shot. I'm guessing the Polo Grounds is the site with some of the high rise apartment buildings that surrounded it in the background. But I wouldn't bet my life on it.