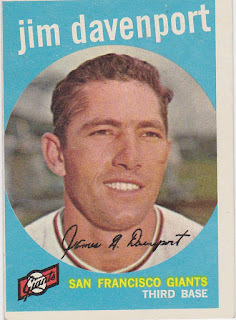 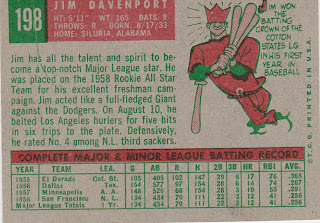 Jim Davenport made his major league debut with the Giants in 1958 after a three season minor league apprenticeship. He was the club's thirdbaseman through the 1963 season. That span included his best season, 1962, when he made his only All Star squad and won a Gold Glove for his nifty work in the field. He had his best batting average and hit his career home run high that same season. That year coincided with the Giants near miss in the World Series against the Yankees.

The 1964 arrival of Jim Ray Hart forced Davenport out of the lineup as the everyday 3B but he still got lots of work at short and second base. Davenport spent his entire career with San Francisco, retiring as a player after the 1970 season.

He has remaining in the game, mostly with the Giants organization, since then as a coach, scout, manager (1986 Giants) and front office executive. He is still with the Giants currently.

I can't really can't say why Davenport is shown hatless. It's possible that Topps had shot pics of him in a NY Giant uni prior to the team's move to the west coast and they did their usual 'take off that cap' dance. Or maybe he had been wearing a SF Giants cap but this shot was the one they liked best.
Posted by Commishbob at 2:00 AM