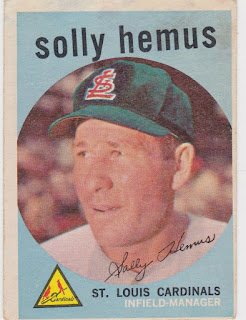 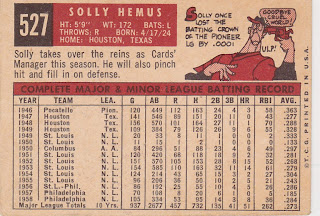 Solly Hemus served a four year apprenticeship in the Cardinals chain in the 40s as he climbed through their talent-rich system. He took over the shortstop job in 1951 and held it for more than three seasons displaying a decent bat and the ability to score runs. His playing time waned as players like Ken Boyer emerged in the mid to late fifties and eventually he was dealt to the Phillies.

With the Phils he was primarily a second baseman and once again had a starting job in 1958. But he was released and signed on with the Cards for the 1959 season as a player-manager, a job description much more common back in the day than it is now.

Hemus managed for two and a half seasons but didn't appear as a player after 1959. He was replaced by Johnny Keane midway through the 1961 season. He later coached with the Mets and Indians and managed in the Mets system until he entered the oil business in Houston where he had played for three years in the Cards' chain.

A couple items of interest... pretty nice write up of Hemus' career can be found here and a 1954 Sports Illustrated article about the baseball cards of the day uses Hemus in the title.

And finally here is a closer look at the cartoon on the back of Hemus' card. As was pointed out in the case of the cartoon on Ron Kline's card by Deal, this one wouldn't fly today. 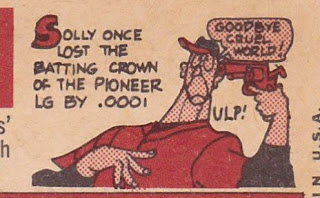