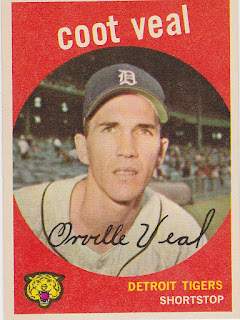 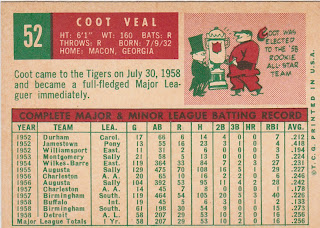 If your name alone could get you into the Hall of Fame then Coot Veal would surely have been inducted years ago. His name has even inspired Dustin's very readable Tiger-centric card blog. The one time Auburn basketball star was signed by the Tigers in 1952 and spent several seasons slowly climbing up the organization's ladder, arriving in the big leagues late in July of 1958.

As the blurb of his card back alluded to, Orville Inman Veal took over the Tiger shortstop job and swung a hot bat for awhile. His debut was a two for three game and he kept his average above .300 into September before falling back to earth. He finished that year at .256 which was higher than in any of his full-time minor league seasons. It was his slick glove work that earned him a salary.

He never again held a starting job in the bigs other than during the 1961 season when he platooned with Bob  Johnson in Washington after being picked up in that season's expansion draft. He was sold to the Pirates after that season and traded to the Tigers midyear 1963. Most of his final three years in baseball, '62 thru '64 were spent in the minors. He finished with a .237 average in 247 games.

After he retired he worked for 34 years for an industrial supply firm as a salesman. He currently lives in his native Georgia. The Denver Post has a nice article about Veal and his days with the American Association champion Denver Bears.

On his red framed card we see Coot occupying the same spot dozens of other visiting players have occupied for the Topps photographer in Yankee Stadium. My copy is a little off center but pretty sharp. I seem to recall it as being one of the first cards I upgraded while pursuing this set.

The Denver Post article has a photo that claims to show Coot chatting with fans but it looks like he's with his family. Don't know for sure but it's a sweet pic either way.