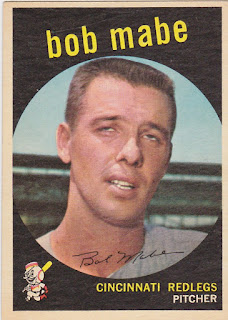 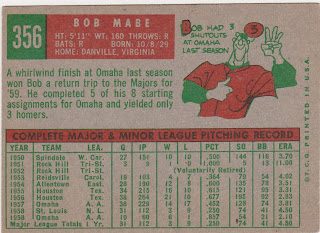 It's not often that I feel compelled to discus the picture on a player's card before I touch on his career. But Bob Made presents an exception. I mean come on, what the heck is that expression all about? I've never run a contest on one of my blogs but if I did I think a 'Caption this Card' contest would be fun and this Mabe card would kick things off.

Anyway Bob Made pitched (a bit) for three different clubs from 1958 through 1960. Originally a Cub signee he was acquired by the Cardinals and built an impressive record as he moved up the Cards organizational ladder. He won 21 games for the Dixie League champion Houston Buffs in 1956. After a season at AAA Omaha he pitched for the Cards early in '58, was sent down and recalled and given a spot in the Cards rotation in July. He made five starts with mixed results and spent the rest of the time in the bullpen.

He was traded to Cincy for 1959, split his season between the Redlegs and the minors and was again traded after that season, this time to the Orioles. Two brief and rocky appearances for the O's put an end to his days in the majors. He finished with a 7-11 record in 142 innings for his career.

An avid golfer, Mabe worked in management for K-Mart and Dan River Mills after retirement.
Posted by Commishbob at 5:00 AM