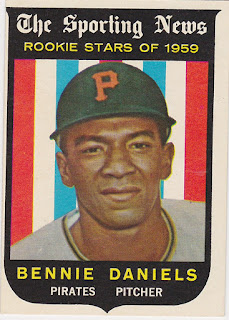 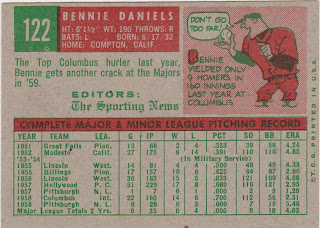 Bennie Daniels gave two years to the military in between five years in the Pirates' chain after signing out of Compton, Ca. in 1951. He had been an outstanding three sport athlete there. Daniels had a couple of looks from the Pirates during the 1957 and 1958 seasons. In his 1957 major league debut he started for the Bucs in the last game ever played at Ebbets Field. He got a full time shot in 1959 and made 12 starts out of a total of 34 appearances and went 7-9. After a return to the minors for most of 1960 he was traded to the Washington Senators for 1961 where he pitched the last game in Griffith Stadium and started the first game ever played in D.C (later named RFK) Stadium.

In D.C. he had five up and down seasons. His best was his first when he won 12 games and lost 11. He was under .500 every year after that. He spent 1966 in the minors and then retired. He worked for various health and veterans affairs departments after his playing days.