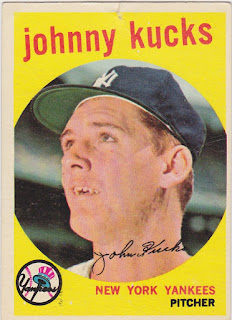 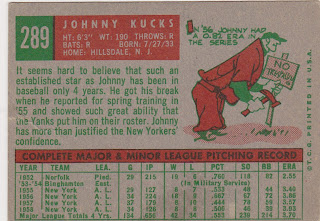 Johnny Kucks, a strong, tall New Jersey native joined the Yankees in 1955 following a year in their minor league system and two in the service. He showed promise in '55 going 8-7 and even getting a taste of World Series ball as he appeared twice in the Series loss to the Dodgers.

Then came 1956 and Kucks had his best season in the bigs. He started 31 games for the Yanks and went 18-8. He was an All Star and ended his work that year with a 9-0 shutout of the Dodgers in the decisive seventh game of the World Series. In doing so he became the last man to win a Series game at Ebbets Field. That win by Kucks came two days after Don Larson's perfect game win and the day after a terrific but overlooked pitching duel between Clem Labine and Bob Turley in Game 6 that was won by Brooklyn 1-0 in the 10th inning.

Kucks never could replicate that '56 magic. He was under .500 as a Yankee over the next two seasons and early in 1959 was dealt to the Athletics. After a couple of less than successful years in K.C. he was traded to the Orioles and then on to the Cardinals but he never was able to reach the majors with either club. He pitched in the minors through the '63 season before retiring.

Kucks worked as a motivational speaker after his baseball days and made numerous appearances at card shows and similar events. His career as a Yankee just barely preceded my many visits to Yankee Stadium. I remember him as a Yankee but I doubt I ever saw him pitch. So I guess I missed my chance to see him posed with the facade behind him as he gazed skyward, probably in thanks for the chance to wear those pinstripes.