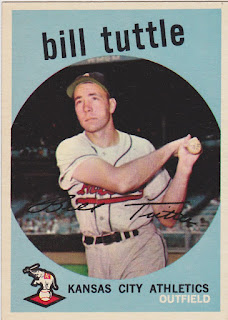 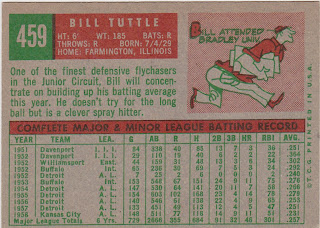 Bill Tuttle played centerfield (and some third base) for three AL teams through the 50s and into the early 60s. Signed by the Tigers he debuted in 1952 and earned a starting spot in center in 1954. His .259 lifetime average is pretty indicative of his hitting prowess although he did hit .300 in 1959 for the A's.

What kept Tuttle in the lineup for the Tigers, A's and Twins for more than a decade was his ability as a fielder. He led all AL outfielders in putouts and assists twice each. His record strictly among all AL centerfielders is even more impressive.

Google his cards and two things stand out... the guy never smiled... and he always had a wad of chewing tobacco in his mouth. Maybe you can't smile with a chaw in your mouth. But Tuttle paid a huge price for that tobacco habit. He developed mouth cancer and lost parts of his mouth, cheek and jaw. You can look up the pics if you want but trust me it's not attractive. He spent the last years of his life warning ballplayers and others about the dangers of smokeless tobacco. He, along with Joe Garagiola, volunteered with the National Spit Tobacco Education Program in trying to get players to at least avoid being seen with the stuff hoping to discourage it's use.