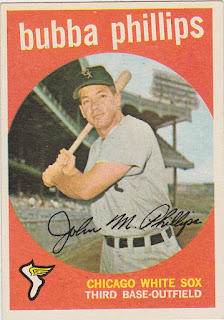 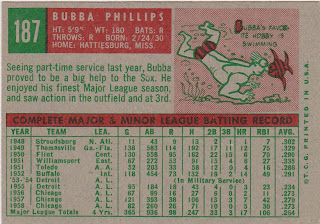 Bubba Phillips (real name: John Melvin Phillips) was a native of Mississippi who was signed by the Tigers in 1949 after a year in the minors with an independent club in Pennsylvania. Phillips, who had played at Mississippi Southern College (now U of Southern Miss.) was apparently much better known for his football prowess than for what he did on the diamond in those days.

He took a two year detour to serve his country while making his way to the bigs where he debuted in 1955 as a 27 year old rookie in a Tigers uni. One year there and he was traded to the White Sox where he stayed through the 1959 season getting an American League championship and World Series losers check. In that Series versus the Dodgers Phillips went 3 for 10 including a double.

For the ChiSox Phillips had been an on again, off again starter at third and in the outfield. Traded to Cleveland for the 1960 season Phillips began a run as an every day player that lasted through 1963 which was his first of two back with the Tigers.

His 1961 season stands out as his best. He had 18 homers to go along with 72 RBI's and a .264 average. Following the 1964 season as a bench option with the Tigers Phillips he was released and he spent a year with the Braves AAA club in Atlanta playing alongside dozens of future big leaguers.

The seafoam green, the facade, even the bank of lights mark this shot as one of the prototypical 'Yankee Stadium visitors side' photos that grace the Topps sets of the time. I think my next set related project will be to tally the photo locations that comprise the set. I'll get right on that.

I had a snarky comment typed about this card and the crowds I've been seeing at Yankee Stadium in the post-season but I figured I'd leave well enough alone.