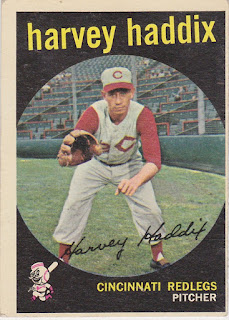 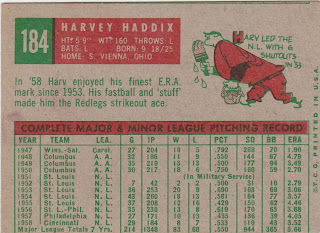 I consider Harvey Haddix the 'cover boy' for my 1959 Topps set. I keep the cards in one of those wide binders that has a sleeve attached to the spine and I keep a copy of this card in that sleeve. When it comes time to get a new run of posts done I reach for my 'Harvey binder'.

Most folks that bother to look at this blog likely have a sense of baseball history and are aware of the remarkable game that Haddix pitched on May 26, 1959 when, while pitching for the Pirates, he tossed 12 perfect innings against the Milwaukee Braves before losing the game in the 13th inning. It was a remarkable effort by an under-the-weather Haddix and it's been chronicled all over the place. One of the most well written accounts can be found on the SI Vault site located here.

An interesting recollection of the night is supplied by a New York Times staffer in this story. A shorter account can be found on the History.com site or just google Harvey Haddix perfect game and click any of the 36,000 hits.

Harvey Haddix pitched for 14 years and went 136-113 with a 3.63 ERA. All but two of those seasons came with National League clubs, the Cardinals (he won 53 games for them after signing in 1947 and working his way up to the bigs in 1952), the Phils (22 wins in two seasons), the Redlegs (one season but he was shown as a Redleg on this '59 card even after being dealt to the Bucs in January), and the Pirates (five seasons and a couple of wins in the 1960 World Series).

His best season was his actual rookie year of 1953 when he won 20 games for St. Louis and led the league with six shutouts. He finished second to Jim Gilliam in the Rookie of the Year balloting.

Haddix closed out his career with two seasons with the Orioles in their bullpen and he saved 10 games in 1964. Haddix had made three NL All Star squads and won three Gold Gloves. One odd note... in 1965 the Orioles sold Haddix to the Braves late in the year but was returned to the Orioles two days later. Since he didn't patch after that point (and had been getting shelled out of the pen for Baltimore for a few weeks previous) I would assume he was found to be 'damaged goods' by Milwaukee and sent back to Charm City for a refund.

Haddix served with several clubs as pitching coach after his active career. Like some other recent cards shown of National Leaguers, this pic was taken in Seals Stadium in San Francisco.