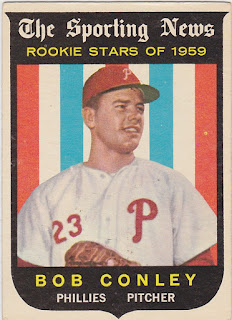 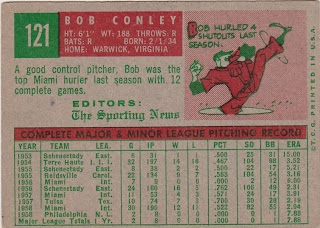 After signing with the Phils out of Kentucky in 1953 Bob Conley pitched his way up the minor league ladder until he was called up for a September look in 1958.

A seven inning, six hit debut versus the Dodgers was followed by an early KO at the hands of the Cubs a few days later. And that was all there was to Conley's career. He threw for a couple more seasons in the minors before hanging up his glove in 1960.

Not surprisingly Conley info is hard to find. He reportedly worked in the restaurant business after his retirement and lived in New Jersey. That's all I got.
Posted by Commishbob at 7:00 AM