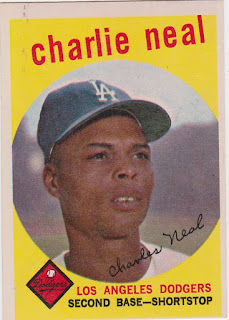 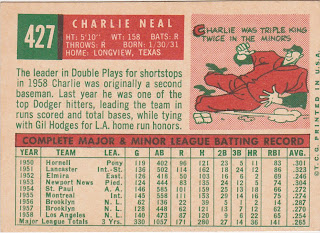 The '59 Charlie Neal card was issued during his best season in the majors. Not only was he a member of the World Champion Dodgers, hitting .373 with two dingers, but he was an All Star, led the NL in triples, won a Gold Glove and scored 103 runs. Oh, yeah... his homer in Game Two of the '59 series was the shot that led to poor Al Smith getting a beer shower. We've looked at that before.

Neal's first pro baseball experience was as a member of the Negro Leagues. He signed with the Brooklyn Dodgers in 1950 and spent six seasons clawing his way up the talent-rich Dodger system. He debuted in 1956 as a second baseman hitting .287 in 62 games. He played with the Dodgers in the World Series that season.

In '57 he took over as the club's regular shortstop. He moved back to second when the team went west in 1958 and he made the All Star team that year. After that eventful 1959 season Neal's hitting and playing time diminished. A Sports Illustrated story that was published after his death mentioned that Neal was never the same after 1959. From that story:


But Neal never hit well again. Plagued by injuries and, perhaps, lethargy—"I quit on myself," he said after batting .235 in 1961—Neal was traded to New York in December 1961, where in his last hurrah he helped the Mets lose 120 games.

As mentioned Neal was traded to the fledgling Mets and after '62 was passed on to the Reds where he finished his career after 1963.

As I read about Neal I didn't see his fielding prowess mentioned until I read that SI article.


Hall of Famer Billy Herman often said that one of his successors as second baseman for the Brooklyn Dodgers, Charlie Neal, made the double play better than any man who ever lived, and to be sure, Neal turned the pivot with a godsent grace.

Nothing special about this card, though. Looks like the LA Coliseum in the background. My copy has nice corners but is seriously off center. As far as Neal cards go I'd pick his '57 as my favorite. Love the Ebbets Field rightfield scoreboard and wall in the background. 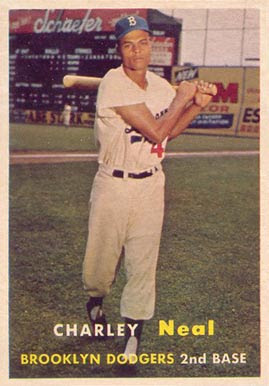