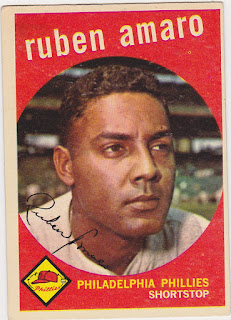 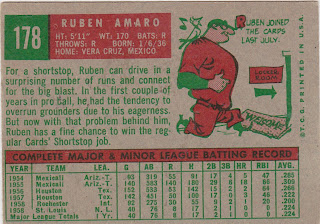 Ruben Amaro Sr. is the son of a Mexican League star and the father of the current Phillies GM as well as a couple of other budding ballplayers. Born to a Cuban father and Mexican mother Amaro came up through the Cardinals chain as a good fielding/fair hitting shortstop and made his debut with the Redbirds in 1958.

Traded to the Phillies after that season he spent a year plus in their chain and emerged again midway through 1960 as their regular shortstop. He remained with the Phils as a 'semi regular' through the 1965 season, spelling Bobby Wine at short and any number of other infielders.

((Semi-relevant sidebar))-->
Amaro was a member of one of my favorite non-Oriole teams, the 1964 Phillies who were famous for their challenge for the pennant that was derailed by Gene Mauch's use of his starting staff (or so goes the theory). That club featured Dick Allen (his remarkable rookie year), Johnny Callison, Wes Covington and a couple of one-time O's catchers, Gus Triandos and Clay Dalrymple. And on and on. They had a seven some odd game lead in August and ended up finishing a game back of the Cards. I saw them sweep two doubleheaders from the Mets at Shea that year!!!
<--((End semi-relevant sidebar))

Amaro won a Gold Glove for that 1964 club. He did it despite starting only 76 games in the field. Traded to the Yanks for the '66 season he was their regular shortstop in 1967 for a perfectly horrible ballclub. But his career was winding down and after a brief fling with the Angels and a stint back in the Phils minor league chain he was finished as a player after 1971. He remained in the game as a coach, scout and minor league manager. Amaro currently serves as a member of the board of the Baseball Assistance Team (BAT) an organization founded to help former Major League, Minor League, and Negro League players through financial and medical hardships.

Looks to be the Polo Grounds behind Amaro in the card's photo. The Phils logo is a nice accent to the red framed card.