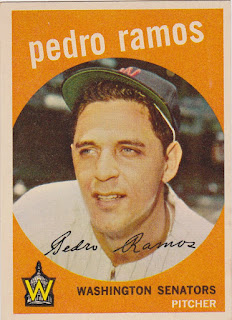 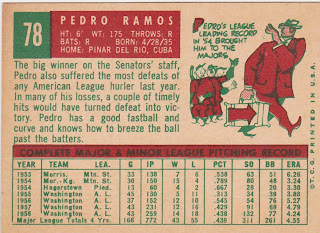 My Dad called him 'Pistol Pete' for no reason I can discern. Pedro Ramos was a Cuban born righthander who broke in with the Washington Senators in 1955. As a starter he led or tied for the AL lead in losses four straight years before the end of the decade pitching for some brutal Nats teams.

The Nats became the Twins and in 1962 they traded Ramos to the Indians with whom he began transitioning to the bullpen. Late in 1964 the Yanks dealt for Ramos and he had a terrific month down the stretch with 8 saves in 12 games as the Yanks won the pennant.

After a couple more good seasons in New York he began a whirlwind tour of the bigs pitching for the Reds, Phils, Pirates and finally found himself back in Washington with the Senators in his last big league stop in 1970. He pitched a bit in the minors before hanging up his glove.

The return to D.C. made him one of the few players to pitch for both the original and expansion Senators. In 15 seasons he went 115 and 160 with 55 saves and was an All Star in 1959. He missed his chance for the post season in 1964 because he was traded for by the Yanks after the deadline.

There are some 'interesting' stories floating around (one told in a book by David Halberstam) about Ramos and  Ted Williams and the signing of a baseball that Ramos used to whiff The Splinter. These don't seem to have any validity. But one story that can't be disputed is the fact that Mickey Mantle blasted a Ramos pitch off the Yankee Stadium facade in May of 1956. One of The Mick's more prodigious blasts for sure. (See the picture/diagram below.) The quote below comes from themick.com which is a page associated with the video bio of Mantle called The American Dream Comes To Life.


"Pedro and I were friends. He used to challenge me to a foot race before games. In one game one of our pitchers, I don't remember who, knocked down one of the Washington players – you could tell it was a knockdown – and Ramos had to knock down one of our players to protect his guys."I was leading off the next inning and I didn't even think about the knockdown. Everybody on our bench and everybody on their bench and even some of the fans knew I was gonna get a knockdown, but I didn't even think about it."Sure enough, Pedro hit me with his first pitch. It didn't make me mad – he didn't try to hit me in the head or anything, you know, just in the butt – but after the game he came up to me and said, 'Meekie, I'm sorry I have to do that.' I said, 'That's okay. But the next time you do it I'm gonna drag a bunt toward first base and run right up your back.' He said, 'You would really do that?'"The funny thing about it was that the next time up was the time I almost hit one out of Yankee Stadium. It hit the façade. After the game he came up to me and said, 'I'd rather have you run up my back than to hit one over the roof!'"

Ramos' SABR page has a lot of great insight into the colorful Cuban including the story behind the All Cuban Triple Play. ESPN's Page Two has an article about the 'Cuban Senators'. It's a good read, stuff I had never given any thought to. Looks like Ramos is wearing the Nats' home pinstripes in this shot which makes this a rare non-Yankee Stadium shot among the '59 American League players' cards.