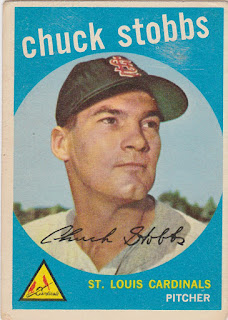 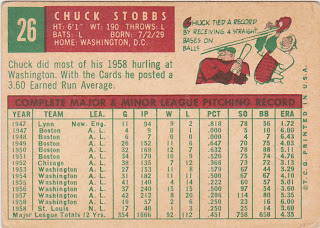 Over 5 seasons, from 1947 through 1961 lefty Chuck Stobbs faced nearly 8400 major league batters. But he's known for one single pitch... the one Mickey Mantle turned into what is known as the longest recorded major league home run.

That shot, which supposedly traveled 565 feet and landed outside Griffith Stadium in D.C. on April 17th, 1953, made headlines and brought Stobbs the type of publicity that most players would rather not have.

Stobbs, a three sport high school athlete who considered football as his best sport, was a bonus signee of the Boston Red Sox in '47 and after a stint in the minors made his debut with the Sox late that year. It was 1949 before Stobbs became a regular part of the Sox staff. He had a better than .500 mark in each of his first three seasons as a full timer in Boston. He stayed in Boston until he was dealt to the White Sox in '52 and moved to the Senators in 1953.

Stobbs pitched for the Nats through 1960 although he was briefly with the Cards in 1958 as a free agent pick-up. He finished his career with the expansion Twins in 1961. In his career he won 106 games.

Stobbs' SABR bio is well worth the read. It includes stories of more about the Mantle homer, Stobbs' life in other sports and a great story of an amateur game in which Stobbs, his father and brother (the team's batboy!) were ejected in the same half inning. Yikes! A Jane Leavy story in the Washington Post published after Stobbs' death has a lot of background on the Mantle homer. Read it... it's great reading from a great writer. An excerpt:

During six years with the Senators and for the rest of his baseball life, Stobbs was asked one question. "His normal answer was, 'Thank God, it didn't come back through the box,' " said his friend Bob Kleinknecht, who met Stobbs on the basketball court in the 1940s.

It's hard to pinpoint where this shot was taken. Stobbs played only the second half of the 1958 season with the Cardinals. I at first thought it might be a '59 spring training picture but there is no way Topps could have obtained a shot for there in time to get this card into the first series. And besides, Stobbs was released by the Cards in January of that year. It doesn't appear to be an airbrushed logo on Stobbs' cap so it had to be taken late in the '58 year. It's those trees that make me wonder where.