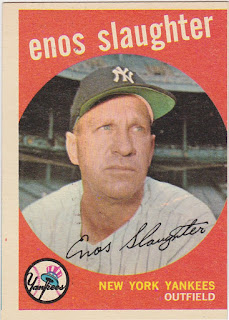 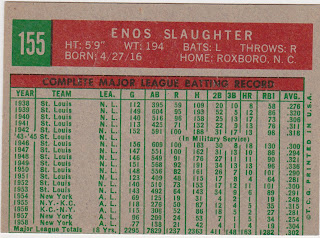 Pictured here with the Yankees, Enos 'Country' Slaughter made his name as a member of the St. Louis Cardinals. He played for the Cards for 13 seasons beginning in 1938 with a three year break for military service during WWII. During his tenure in St. Louis Slaughter made 10 NL All Star squads and finished in the top ten in MVP voting several times.

He hit .305 for the Cards and thought he was going to remain with them for his entire career. He was extremely disappointed (to the point of tears it seems) when he was dealt to the Yanks just prior to the 1954 season for three players including a young Bill Virdon. After a disappointing '54 season in pinstripes he was traded to Kansas City in May of 1955 but came back to the Yanks via waivers in 1956. (There's that Yankees-Athletics underground railroad again.)

His days as a regular over, Slaughter played part time for the Yanks until he was waived and claimed by the Braves for the final weeks of the '59 season. That was his last fling on the ball field.

During his long career Slaughter played in five World Series, winning one with the Cards and three with the Yankees. He compiled a .291 post season average. In the 1956 Series win over the Dodgers Slaughter went 7 for 20 with a homer and four RBIs. At one time or another during his Cardinals career he led the league in hits, doubles, triples, extra base hits, outfield assists, fielding % as an outfielder and RBIs. In 1959 he was the oldest player in either league.

In the 1946 Series his Game Seven 'Mad Dash' accounted for the deciding run in the Cards' win over the Red Sox. The video is below.

Slaughter was elected to the Hall of Fame in 1985. There is speculation that his election wasn't done sooner because of the reported issues he had with Jackie Robinson debuting with the Dodgers. Slaughter was said to have led (along with teammate Terry Moore) a movement to strike in protest of Robinson's playing. Slaughter always maintained he had no part in that and that the on the field incident (a hard slide) was just a routine part of playing his no holds barred game. That aspect of his career, and a lot more, is detailed here. As usual a great bio of Slaughter can be found on the SABR site.

In his 1959 Topps picture Slaughter looks like he's still upset at being traded off by St. Louis. Standard Yankee Stadium backdrop in a red frame makes this a nice card of a Hall of Famer. I believe it's his last regular Topps card. I'm sure one of the three readers on this blog will correct me if I'm wrong on that.