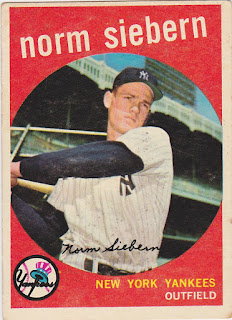 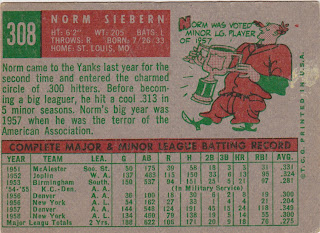 I don't care if it's a Yankee card.... I love this one. Absolutely love this card. Norm Siebern with a neat swinging follow-through pose, the iconic facade of Yankee Stadium, the whole thing lit by sunshine in a red frame. Damn, this is baseball art.

Returning to the Yanks in 1958 he took over the regular left-field job, hit .300 and won a Gold Glove. His numbers fell off a bit in '59 and he was traded to the Athletics in the deal that brought Roger Maris to New York.

Siebern had steadily improved numbers in Kansas City. His homer total peaked in '62 with 25. He made the AL All Star squads in 1962 and 1963. But after he showed some decline in '63 he found himself dealt to the Orioles in 1964.

After a couple of years with the Birds (he was an All Star again and led the AL in walks in '64) he was traded to the Angels in December of 1965. In return the Orioles got outfielder Dick Simpson. That's significant because a week after that deal Simpson was one of the players sent to the Reds in the Frank Robinson trade.

Siebern banged around with the Angels,Giants and Red Sox with whom he appeared in the '67 World Series as a pinch hitter. He was one for three. He had already won a ring with the '58 Yankees. After he retired Siebern scouted for the A's and Royals before opening an insurance agency in Florida where he continues to live. Much more on Norm Siebern can be found in his SABR biography.

Did I tell you I love this card?

SUNDAY MORNING NOTE: Talk about lousy timing!! I woke up this morning of all morning and realized I had a Yankee card scheduled to run today!!! So, in an attempt to reverse the vibes I'm feeling here is a  non-1959 Topps card. Something I rarely add to an entry. Hope your Sunday comes up 'aces'. 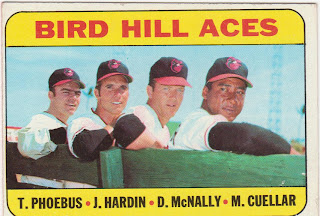