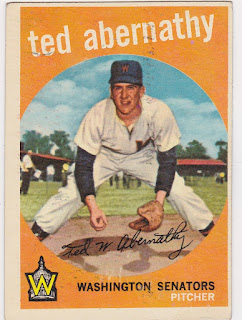 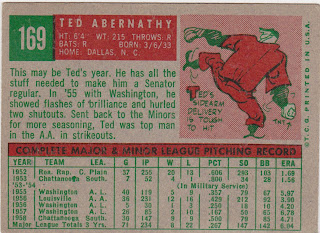 Seeing so much of the Orioles' Darren O'Day lately has reminded me of Ted Abernathy. Early in his career Abernathy had arm surgery that caused him to adapt the side arm delivery that evolved into what the sportscasters always referred to as 'a submarine' delivery. Don't think you hear that term much these days.

Abernathy signed with the Senators in 1952 and won 20 games as a starter in the Nats chain. He was in the military in 1954 but returned for a half decade run of bouncing back and forth between the Senators and their minor league clubs as he evolved from a starting role into a reliever. It was during this time that he had his arm problems that led to his pitching style change.

He reestablished himself with the Indians in 1963 after a time in the Braves organization and a trade two years prior and became a top bullpen man for a few seasons in the mid-60s. He was reliever of the year in Chicago with the Cubs in 1965 and led the league in saves with a then record 31. He duplicated that feat with the Reds in 1967. During that mid-60s era Abernathy was a workhorse as he led his league in appearances three times.

From there his career ebbed and flowed for a handful of clubs through 1971 when he found himself with the Royals and had a 23 save season which was good enough for second in the category in the AL. In 14 major league seasons he collected 148 saves.

After his final big league season Abernathy pitched for the independent Wilson (N.C.) Pennants of the Carolina League as a 40 year old. He was nearly twice the age of most of his teammates. One of those teammates was fellow North Carolina native John Donaldson who played the infield for the A's in the 60s. Turns out that Donaldson played in Wilson twice, with stints that came ten years apart. Funny what you find when you go down a Ted Abernathy-inspired rabbit hole.

Abernathy worked for his son's landscaping firm (among others) after retirement. He passed away in 2004.

This is one of those 'retouched-by-a-painter shots that are seen in Topps sets in the 50s. Most of those appear to be based on either spring training or minor league shots. Abernathy's card is no different. Looks like team execs, reporters or scouts in the background! 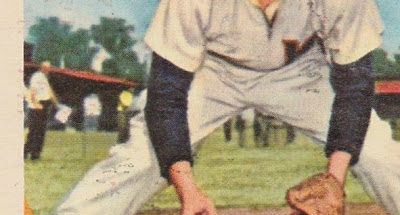