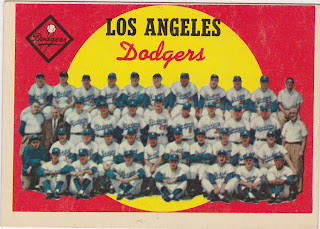 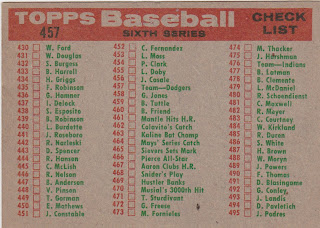 The '59 Dodgers went 88-68 under Walt Alston, finishing 2 games in front of the defending NL champion Braves and 4 ahead of the rival SF Giants. Alston was in his sixth year of managing the Brooklyn/Los Angeles club and '59 was his second world title and third pennant. He was less than one third the way into his 23 season reign as Dodger manager.

The club's .257 average was below the league average but they scored more runs than the league average and they led the NL in stolen bases even though Maury Wills was a rookie part-time player a year away from displaying his base stealing skills.

On the mound Don Drysdale led the club with 17 wins. Sandy Koufax was still a rather raw 23 year old honing his craft. He went 8-6. The Dodgers' team ERA ranked third in the NL behind both the Braves and Giants. They had the most strike outs as a staff, easily.

The Dodgers were in third place on September 15 when the launched a 7-2 run over the last 9 games to surge past the Giants and tie the Braves. The swept a best of three playoff with Milwaukee to earn the right to face the White Sox in the 1959 World Series. They won the Series in six games and reliever Larry Sherry was named Series MVP.

The '59 Series is among the first ones I have clear memories of paying attention to. I know I rooted for the White Sox. I was an A.L. guy and my father had no use for the Dodgers or Giants back then.

In general I'm not a fan of the team cards in the '59 set. I don't like the color circle being used in place of the natural background as is the case with the base cards. But there is something about this Dodgers team card that just works. Despite the fuzzy photo and it being so mis-cut this is a really cool card.
Posted by Commishbob at 6:00 AM