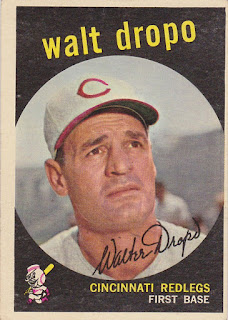 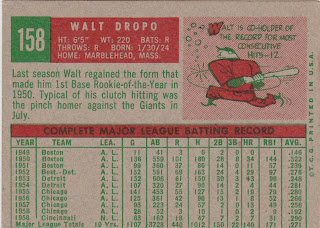 Unfortunately Dropo spent the next twelve seasons trying to recapture that rookie magic. It didn't happen. Whether or not that was due to the fractured wrist he suffered in 1951 is open for conjecture. He had a couple of good years. He hit .290 with 29 homers and 94 RBIs in 1952 and came back with 96 RBIs the next year. But nothing ever approached that rookie year. He spent time with the Tigers, White Sox, Reds and Orioles before he retired after the 1961 season.

Dropo had been a star at UConn playing baseball, basketball and football. He had pro offers from teams in all three sports and chose baseball. He remains the holder of the second highest scoring average as a UConn hoops player. That's pretty impressive considering the strength of that program. And at the SI Vault site there is a nice retro story/interview with Big Walt.

From his New York Times obit:


After baseball, he worked in insurance, investments, his family’s fireworks business and in the land-development business. He remained active in UConn alumni affairs, and his family established the university’s first fully endowed scholarship.

I sure like the black framed cards in the 1959 set. The portrait of Dropo is pretty routine though. He seems to be asking the 'man above' why he never could replay that dream season of 1950. Still a nice card. Looks like the Los Angeles Coliseum in the background.