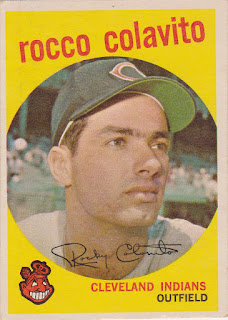 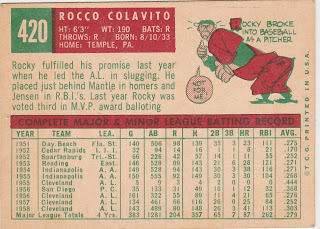 If there is a better name in baseball annals that 'Rocky' Colavito I'd like to hear it. Rocco Domenico Colavito grew up a Yankee fan in the Bronx but, after dropping out of high school, was signed by the Indians in 1951. He showed his power as a minor leaguer in the first half of the decade and made the Indians club as a regular in rightfield in 1956.

Over the next decade he became the 5th American Leaguer to hit more than 20 homers in eleven consecutive seasons. During that tine he was involved in one of the most notable trades in baseball history. Coming off a league leading 42 home run season he was dealt to the Tigers in April of 1960 for the defending batting champ, Harvey Kuenn. Indians fans were in an uproar over the deal and books have been written that claim the trade triggered a curse that haunts the Indians to this day.

After an off year in 1963 Colavito was traded to Kansas City for the next season and then back to the Indians. As his career would down he played for the White Sox, Dodgers and Yankees.


Colavito has appeared here previously as a Baseball Thrills card (#462) subject that led to some fun detective work. I was able to find the origin of the picture used on the card and pinpoint the date of the actual play.
Rocky was a popular player in his time and remains one today among fans and collectors.  This '59 card is cool but to me almost any Colavito card is. I think I upgraded this one a couple of times to get one I found worthy of representing one of my favorite players in this set. I've got about four or five vintage Colavitos and a modern one I've featured in my other blog. Isn't this a great card? 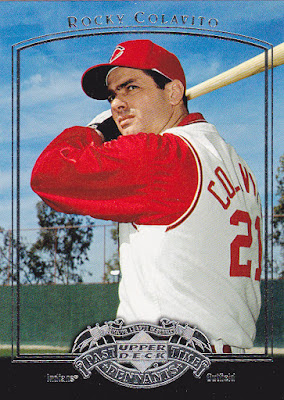 Posted by Commishbob at 6:16 AM