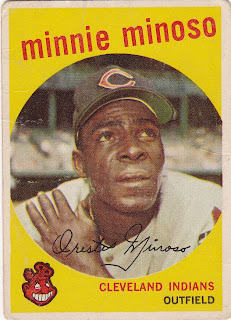 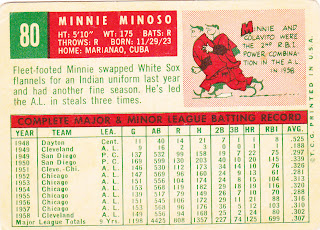 Minnie Minoso was born 'Saturnino Orestes Armas Miñoso Arrieta' in Havana, Cuba in 1925. That's one name for each decade he played in the majors. Yes, Minoso played big league ball in the 40's, 50's, 60's, 70's and 80's. Or at least he made appearances in those decades. The 'playing' he did in 1976 and 1980 with the White Sox was really just PR, a couple of 'cup of coffee' whirls that got headlines when they happened. And add to this time spent in the independent Northern League in the following two decades makes Minoso the only guy to have played professionally in seven decades! (I played intramural softball in four decades at the University of Houston but that's a different discussion.)

The five (or seven) decade hype kind of overshadows a pretty accomplished major league career put together by Minoso. Following a run as a Negro League player in the late forties Minoso debuted with the Indians in 1949. For the next dozen years, covering two separate tours with both the White Sox and Indians, Minoso led the AL at least once in triples, doubles, hits, stolen bases, total bases and hit-by-pitches. He made seven All Star squads and routinely garnered MVP votes. Three Gold Gloves line his mantel as well.

His days as a regular player ended with stints with the Cardinals and Senators in the early 60's. But Minoso wasn't through as he played several seasons in Mexico after that. Then came the publicity tours with the Sox and  independent ball. Crazy.

Minoso still remains active with card show appearances and he threw out the first pitch at last season's White Sox' opener. He's got a well designed webpage with some great pictures and, of course, the opportunity to purchase Minoso gear. (Cool hat, but $45???!!!)

I have a pretty lousy copy of this card as you can see. But Minoso is an interesting guy and I have liked him since I saw him play first in 1960 This one is on my 'upgrade asap' list.

Here's one of the pics you can buy at his site. 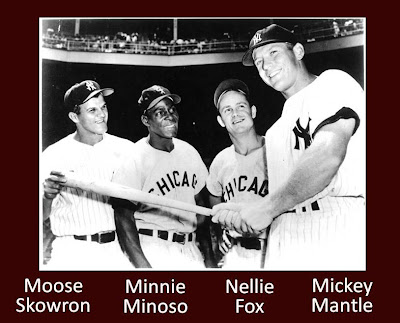 Hey, look! That's me in background in the upper deck at Yankee Stadium, My Dad is off getting the first of my three hot dogs. ;-)
Posted by Commishbob at 8:29 AM