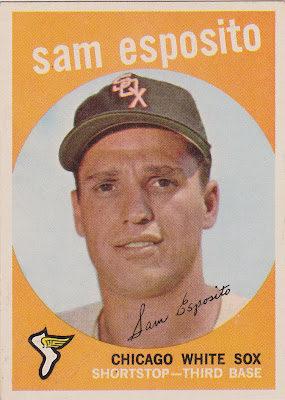 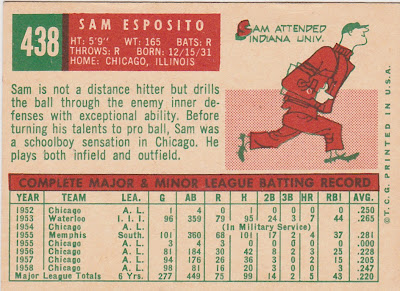 "Esposito' was my Mom's maiden name. When Sammy Esposito (he was always Sammy to me) was playing she'd jokingly say they were related. We knew better but it made me a fan of the guy.

Esposito signed with his hometown White Sox in 1952. After a couple token appearances with the big club sandwiched around minor league stints and a year in the military he stuck with the Sox in 1956. He never was a full time starter but got 200+ at bats in both '56 and '57 serving as a platoon guy and utility infielder. He hung with the Sox thru early in the 1963 season when he was released and signed on with the Athletics for the rest of the year.

Never an All Star, Esposito was nevertheless part of the White Sox '59 AL title team and he made a couple of  off-the-bench appearances in the World Series that year against the Dodgers. He had two at bats in Game One after subbing at third for Billy Goodman.

After retiring he became the head baseball coach at NC State and held that job from 1967 through 1987. He was this year named to the school's Hall of Fame. In 21 seasons his Wolf Pack clubs never finished below .500 after having had just one season above 20 wins ever. He was twice ACC Coach of the Year and in 1968 they finished third in the CWS. Esposito coached 12 future big leaguers and four who played more than ten major league seasons.

The orange bordered card of Esposito really shows off the terrific cap insignia and the 'flying sock' team logo. I mentioned recently how I have finally tracked one down in my size. Great look I think.
Posted by Commishbob at 10:01 AM