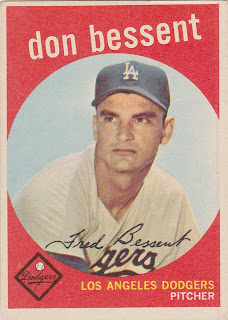 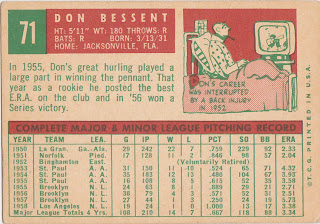 If the name Don Bessent doesn't ring a bell, you're not alone. I thought I knew a bit about the 'Boys of Summer' era Dodgers but I can't place this guy. And I feel guilty because every thing I read says he was a pretty fair reliever during his career for the Dodgers in Brooklyn, particularly in the Bums' World Series season of 1955 and 1956.
The numbers show Bessent (his actual first name is 'Fred' btw... note his card-front sig) pitched well in both of those Series', getting a ring in '55 and a win in '56. He was less effective in his next two seasons and ended up pitching in the Dodgers, Indians and Orioles systems until he left the game in 1962. By the time this card was issued he had made his last pitch in the majors.
Bessent went on to become a State Representative in his native Florida after retirement. He died of alcohol poisoning at the age of 59 while parked outside a Jacksonville fast food spot. That fact, and his nickname (The Weasel), deserve some further homework.
Any Dodger fans out there? What say you, Night Owl? You know anything about this guy?
Posted by Commishbob at 10:00 PM