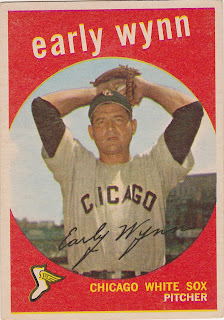 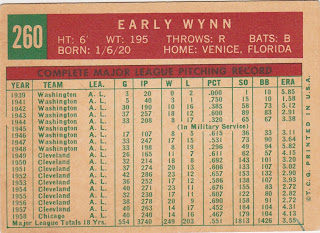 I present Hall of Famer and 300 game winner Early Wynn. Does this guy personify 1950's baseball or what? By the 1959 season Wynn had long ago established his resume. He'd had numerous 20 win seasons, an AL championship ring, many All Star appearances, etc. He'd pretty much split his time in the bigs between the Senators and Indians and served a year (1945) in the military during WWII. Along the way he had built a reputation as a durable hard-nosed headhunter with a blazing fastball as well as a variety of other pitches.
Some thought he was on the decline when the Indians traded him to the White Sox for 1958 (although it should be noted a lot of Indian fans disagreed). Wynn showed that he had some life left in his powerful arm and led the Sox to the '59 World Series to cap off a year that saw him win the Cy Young Award. He had a good year again in 1960, winning 14, but by '63 he was hooking on with the Indians again at mid-season in an effort to get his elusive 300th win. He picked it up on July 13 in Kansas City with a shaky five inning effort. It was his last win. He retired after the '63 season and spent time as a pitching coach and broadcaster for several big league clubs.
Wynn is another guy who is identified with different club by different people. To me he's an Indian mainly due to my managing the '54 Tribe in Strat-O-Matic. This despite having seen him live as a White Sox starter.
That's the Yankee Stadium scoreboard to the right of this shot on the '59 card. Can't quite make out the Ballantine sign or the Longines clock but they are there someplace. The White Sox cap with the red outlined S-O-X took me years to track down in my size (or any size for that mater). I don't consider it traitorous to my Oriole roots. It's just a great cap. I have a Milwaukee Braves cap, too.
Finally, here is the Bowman Early Wynn card from their 1953 set. No other comment needed. 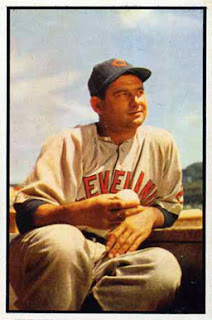 Posted by Commishbob at 2:58 PM