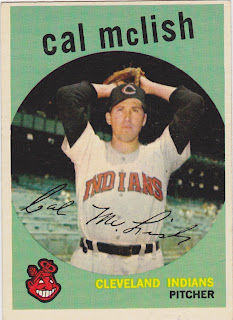 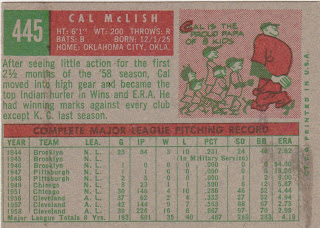 I'm only going to type this once.... Cal McLish's full name is: Calvin Coolidge Julius Caesar Tuskahoma McLish. He claimed that he was the first of his family's eight children that his father was 'allowed' to name so he made the most of the opportunity and tagged Cal with the long moniker. We only have Cal's word on that I suppose.
But it brings up an interesting point about the back of McLish's '59 Topps card. Note the cartoon and the statement that "Cal is the proud papa of 8 kids." If that's to be believed than he had fathered 8 kids by 1959. Not to mention that he was from a family of eight kids! Quite a coincidence I'd say. Did Topps get their facts crossed? I did some digging. I read the LA Times obit that followed McLish's death in 2010 and they list five surviving children. OK, so maybe three of his kids had passed on. Entirely possible. So I decided that the Topps blurb was correct and was an interesting fact, not an error.
Then I found a Baseball Digest story written in 1959, same year as the card. The story mentions his marriage and the fact that McLish children began arriving early and often. Then they mentioned five names. So he had five kids by 1959, not eight. The point? Well, I guess there isn't any except the guys who wrote the backs of Topps cards in 1959 could have benefited from Google. And the fact that sometimes I fixate on the minutae of baseball cards.
EDIT: See the comments for clarification. I'm losing my eyesight.
Anyway, Cal McLish took a long and winding road to his best season, the one that saw this card issued, 1959. He was signed by the Dodgers as a poor Oklahoma sandlotter in the mid 40s. He'd been an ambidextrous pitcher and switch hitter in American Legion ball. He was lit up in his debut season of 1944 in Brooklyn. Spent 1945 in the military and the next nine season bouncing between the Dodgers, Pirates and Cubs and their various minor league affiliates.
McLish's dogged determination landed him in Cleveland in '56 as a member of the Indian's bullpen and he transitioned to a starters job in 1958, winning 16 games. That nearly matched the 19 he had won in his career previously. In 1959 he won a career high 19 and made his only All Star team.
Following his banner year McLish was dealt to the Reds and then went on to White Sox and Phils. He never could match his '58/'59 form. He retired after the 1964 season. He's been released mid-year by the Phils.
Following his playing days he remained in the games as a pitching coach and scout. The closest he ever came to winning a championship was as a member of the staff of the '82 AL champion Brewers.
McLish is a member of the Oklahoma Sports Hall of Fame.
Posted by Commishbob at 7:13 AM