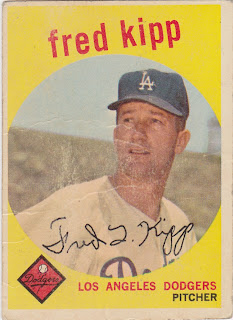 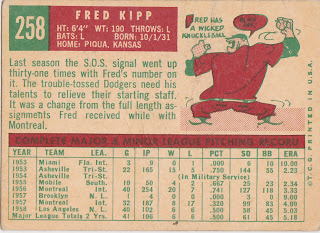 Here's one that could stand to be upgraded, the Dodgers' Fred Kipp. It looks worse in the scan than it does in my binder. When this card was issued Kipp was coming off a 40 appearance season in Los Angeles including nine starts.
He was a left-handed knuckleballer who swung a good bat. He showed that with a .250 average during his 1958 season. In bits and pieces of three other seasons in the bigs he got into just seven other games. He had been a workhorse in the Dodgers chain and ended his career with a 3 season run the Yankees AAA Richmond affiliate beginning in 1960.
I like how, in typical Topps fashion, his cartoon takes three long sentences to say "He started a bunch in the minors but mostly relieved for the Dodgers last year." What does "trouble tossed" mean exactly?
Kipp is a member of the Kansas Baseball Hall of Fame (don't laugh, Walter Johnson is in there, too. So is Ralph Houk) and attended Emporia State. I had a good friend who went there after we graduated high school in Jersey. Never really told me why.
This makes three Dodgers in the past week of so to be featured. For whatever that implies.
Posted by Commishbob at 8:50 AM