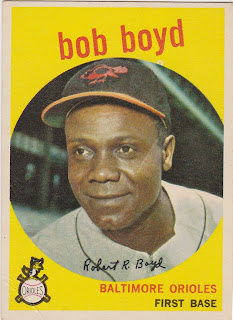 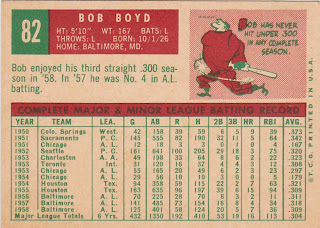 For a time in the fall of 1960 Baltimore sports fans could cheer on the exploits of two guys named 'Bob Boyd' who were playing for the local professional franchises. 'Bobby' Boyd was, that September, a rookie cornerback with my cherished Baltimore Colts. Drafted out of Oklahoma he played very stellar football for a decade in Memorial Stadium. But at the opposite end of the age spectrum was a steady pro playing in the orange and black trimmed uni of the city's baseball team.
In the twilight of an effective stint with the Orioles was sweet swinging 'Bob' Boyd who's smiling visage on a nice '59 Topps card is featured today. Nicknamed 'Rope' for his line drive hitting, Boyd was a Mississippi native, born in 1919. He began his career as a member of the Negro League's Memphis Red Sox in 1947.
By 1950 he's been signed by the White Sox and split time between them, their farm system, and the Cardinals system after a 1954 trade. He was out of pro ball in 1955 but he was drafted by the Orioles for the '56 season and began a span of production that saw him hit very well for four years as a regular or close to it. Boyd hit .300 or better for his first three years in Charm City with a smattering of power. He was fourth in the AL in 1957. He was the first Oriole to finish with a better than .300 average in the century.
He ranked as one of the majors oldest players at the time and was indeed the oldest in the AL as he wound down his career in Kansas City in 1961. Traded to the Braves that year he became the oldest player over there as well. Boyd died at age 84. He was named as member of the Negro League Hall of Fame and of the National Baseball Congress Hall of Fame.
Yellow bordered O's card, Yankee Stadium background, a little off centered but with good corners. Nice card. Here's a bonus... Bob Boyd of the Memphis Red Sox and Orioles: 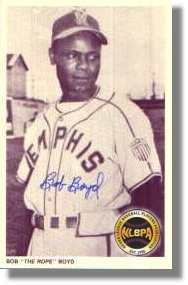 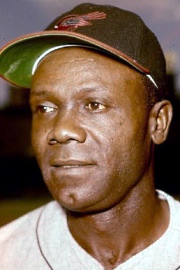 And Bob (aka Bobby) Boyd on the Baltimore Colts (whatever happened to that franchise, anyway?) 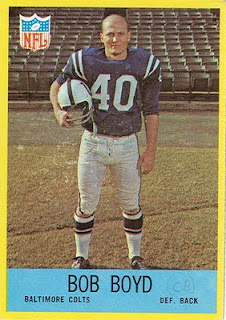