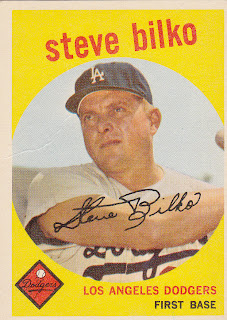 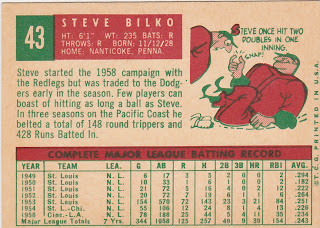 Steve Bilko was 'one of those guys". Big time minor league slugger that never could replicate those feats in the majors. After slugging his way through the Cardinals organization and getting yearly looks with the big club Bilko finally stuck with the Cards in 1953. That year he played full time, getting into 154 games, banging out 21 homers and leading the league in whiffs.

Then it was back to the nomadic existence of a bat-for-hire and Bilko played in the Cubs', Dodgers' and Orioles chains while sandwiching in a 20 homer season with the expansion Los Angeles Angels in 1961. That year represented a return to the scene of his minor league 'glory'. LA's Wrigley Field had been his home with the PCL's Angels. He'd popped 148 homers and  had 428 RBI's in '55-'57 when the club was a Cub affiliate.

Bilko retired after the 1963 season he spent with the Rochester club in the Orioles system. He died at the age of just 49 in 1978.

You have to like those old extra short sleeved uni tops that allowed Bilko and others like him to show off their 'guns'.
Posted by Commishbob at 2:21 PM