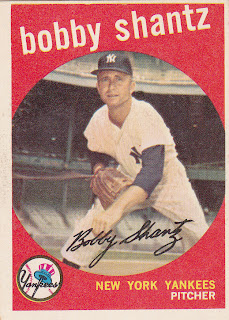 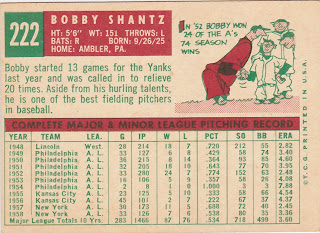 I frequent a baseball related forum and a thread came up recently concerning which team you associate a particular player with. For example: Bill Madlock... Pirates? Cubs? Or Nolan Ryan... Angels? Rangers? Astros?
I thought of that when I was looking at Bobby Shantz' career. To me he's a Yankee but he actually only spent four of sixteen big league seasons in the Bronx. And his best work by far came in his days with the Athletics, particularly in Philadelphia.
In 1951, his third season in the bigs he went 18-10 for a 70 win A's club and he backed that up in '52 with a superb season. He was 24-7 for the A's who won 79 games total. He posted an ERA of 2.48 and a WHIP of 1.048, best in the league. For his efforts the 5'6" side-armer was named AL MVP. Not an easy thing to do in those days of sluggers and stars.
Shantz never approached those numbers again in the remainder of his career but he finished with eight Gold Gloves for his fielding prowess (he'd have won more perhaps had they been awarded prior to 1957. He moved to a relievers role in 1958. He was a three time All Star and picked up a World Series ring and two more AL titles while with the Yankees in the late 50's and 1960.
Shantz' brother Billy, a catcher, teamed with him with the A's in both Philly and Kansas City and briefly with the Yanks in 1960. I believe Bobby still does card shows.
Posted by Commishbob at 7:58 PM