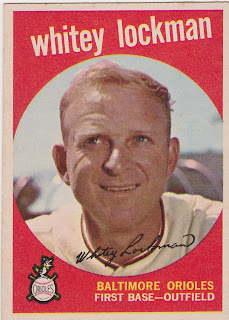 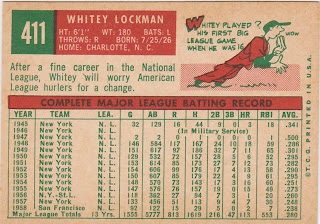 Another '59er that looks like your uncle, Whitey Lockman was a baseball 'lifer'. He was playing in the minors at 16 and spent pretty much the entirety of his life in the game in one position or another.
Lockman began his major league career as an 18 year old New York Giant in 1945. After spending the next season in the military he returned and played for the Giants right up through 1958 and their move to the west coast. He did take a detour to St. Louis and played the second half of the '56 season with the Cardinals after a mid-season trade but the Giants, perhaps missing his wavy reddish locks, traded for him in time for 1957.
Playing the outfield and first base Lockman put together a very respectable resume with the Giants making the 1952 All Star Game and challenging the .300 mark fairly regularly. He scored the tying run in the famous 'Shot Heard 'Round the World' Giants-Dodgers 1951 playoff game. He had reached base before the Bobby Thomson blast that ended it.
As reflected on this card he emerged with the Orioles for 1959 but was dealt to the Reds in June. He was brought back to Cincy in 1960 but played sparingly before being released for good in July.
After his playing days he became a coach for the Reds and then worked his way through the Cubs organization in nearly every capacity possible culminating with his being named their manager in 1972, a job he held into 1974. He continued in the game in the front offices of the Cubs, Expos and Marlins through 2001.
Yahoo Sports ran a nice obit/story after Lockman died in 2009. It's a tribute to a baseball life well lived.
This is a recently upgraded copy of the Whitey Lockman card. Since I have one in my Topps Orioles run I guess I have at least three now. I'm pretty much Whitey Lockman'd out.
Posted by Commishbob at 3:53 AM