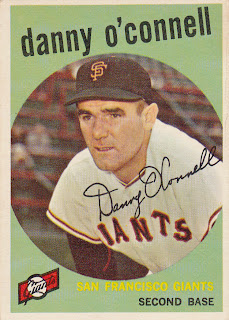 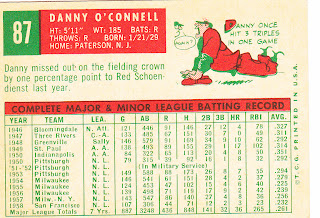 Danny O'Connell.... does it get any more Irish than that? First things first, though.... I really need to adjust those scanner settings. The gray cardboard backs of some of these cards looks bright enough to read by. Jeez.

Anyway, Danny O'Connell broke into pro ball with the independent Bloomingdale Troopers of the North Atlantic League. I mention that because I think it's just a great name for a franchise.  He was soon a Brooklyn Dodger signee, but the Dodgers had more good infielders in their chain than they could count and he was traded to the Pirates prior to 1950 and debuted with them that season. He finished third in the Rookie of the Year voting playing mostly shortstop. After a couple of years in the military during the Korean conflict he was back in the bigs in 1953. After another good season he was dealt to the Braves where he beame their regular second baseman.

He was sent on to the Giants for the 1957 season, just in time to miss out on the Braves championship NL run. He finished his career in the AL with a couple of seasons with the Senators. He died in 1969 at the young age of 49. He was from the area I grew up in, the Clifton-Nutley-Patterson New Jersey region. He'd been a high school ref and I wonder if he ever did any of our games.
Posted by Commishbob at 9:16 AM