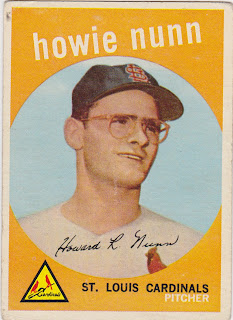 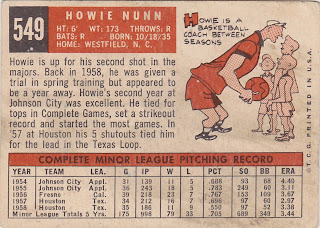 Howie Nunn appeared in 46 ballgames between 1958 and 1962 for the Cardinals and Reds. He had a 4-3 career record. He was a signee of the expansion New York Mets and spent time in their first spring training camp in 1962 before being returned to the Reds. (edit: Actually Nunn had his contract sold to the Mets by the Reds. He talks about it in his interview linked below. I stand corrected.)
You can read an interesting two part interview/bio with Howie here and here. At the bottom of the second part of that series are some comments from Nunn's cousin and great niece/nephew. Nothing earth shattering there but it served to remind me that these baseball cards feature guys who are/were someone's father, brother, son, cousin, etc. He's the the first of two featured player to have pitched for the Houston Buffs. If I could interview him I'd ask how it was to pitch outdoors in Houston's summer heat.
I'd also ask about his 1960 season spent with the Havana Sugar Kings, until July that is, when the Castro regime nationalized all business and baseball up and moved the franchise to Jersey City. One day you're playing in colorful, storied (and tumultuous) Havana and the next day you're in Jersey City, New Jersey. There were a boatload (pun intended) of past and future big leagues on that 1960 Havana/Jersey City squad with Nunn including Mike Cuellar, Cookie Rojas, Luis Arroyo, Leo Cardenas and Brooks Lawrence.
This high numbered card is in decent shape. It's not off centered like so many of mine are. And the corners aren't bad either. The best part is the back that features a cartoon pointing out a fact very common back then. Nunn spent his off seasons as a basketball coach. Players such as this didn't make the kind of money that's made these days and many had to supplement with second incomes. I bet to a kid it was cool to have a coach who was also a big league player.
Howie Nunn died just weeks ago, in February of this year.
Posted by Commishbob at 12:00 PM