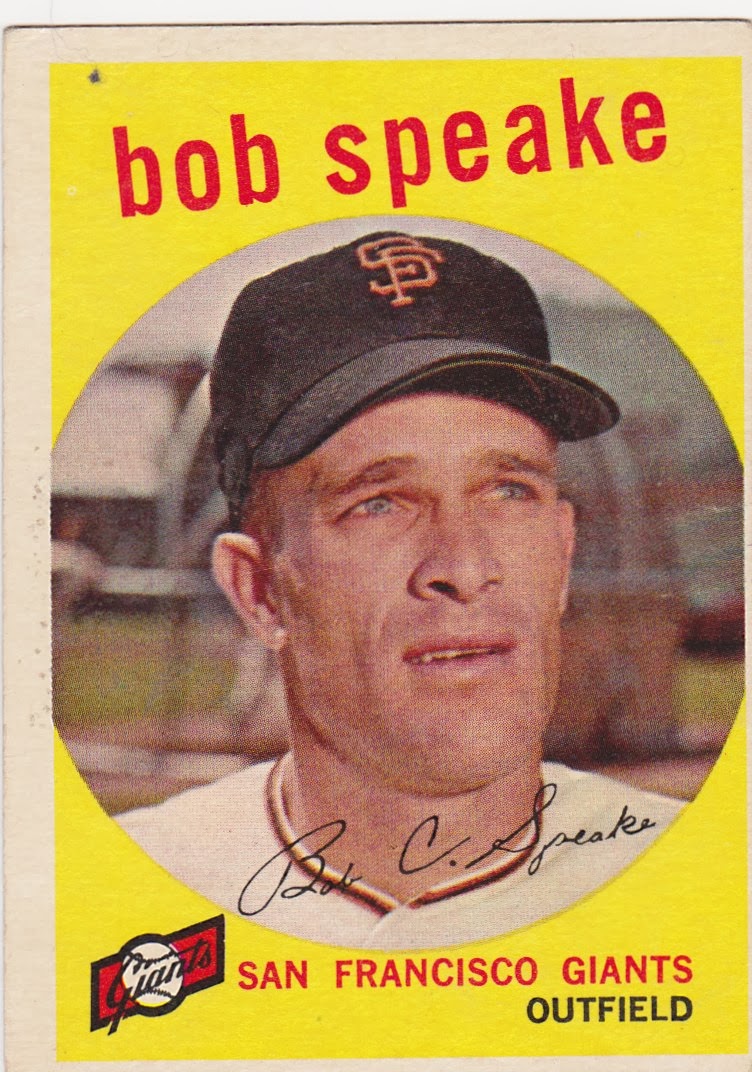 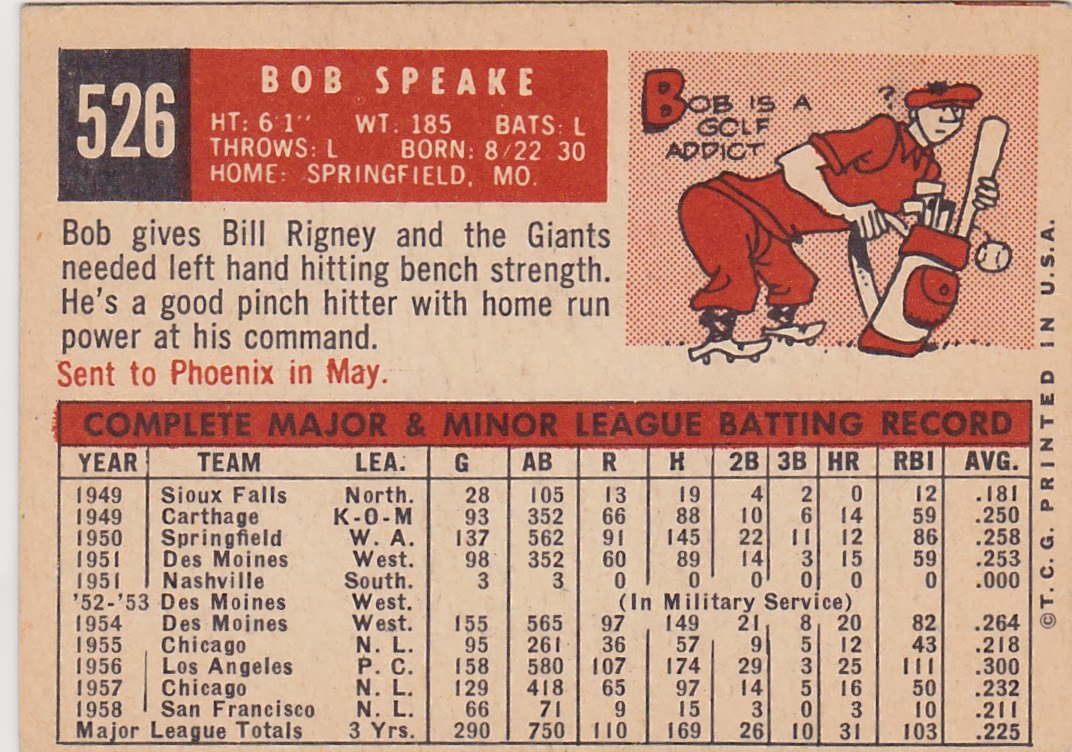 Outfielder Bob Speake had a major league 'moment in the sun' in 1955. As a Cubs rookie he was given the role as a starting outfielder due to an injury to Hank Sauer and he went on a home run tear with 10 in his first 90 big league at-bats. He capped his run with five RBIs in a Memorial Day doubleheader on a 4 for 8 day that saw his average hit .304. But it was downhill from there and he ended the season with just two more homers and a .218 average.

Sports Illustrated had taken note of Speake during his hot 1955 run and published the following in this June 13 issue in an article on the Cubs surprising success:


The lead in the melodrama has been played by a lean young man named Bob Speake, who hit all of .264 for Des Moines last year and who had been to bat only eight times for the Cubs prior to May 2. Then veteran Outfielder Hank Sauer ate tainted shrimp and became ill with food poisoning. Speake, a first baseman by trade, was pressed into service as an outfielder and promptly caught fire. He hit a three-run triple against the Giants, a two-run homer to beat the Reds, a two-run homer to beat the Phils, a tenth-inning two-run homer to beat the Braves. He hit a home run to beat the Cardinals 1-0 in the first game of a double-header on May 25 and a run-producing double that provided the margin of victory in the second game. He hit a two-run homer in a 3-0 game against the Cards the next day. On Memorial Day he hit a two-run home run and batted in four runs as the Cubs beat the Cardinals 9-5 in the first game and won the second game with a home run in the eleventh inning. It was a very merry month of May for young Mr. Speake.

Unfortunately for Speake and the Cubs, as we have seen, by the time this was on newstands the slipper had been lost and the coach was again a pumpkin on the North Side.

He had begun as a pro by signing with the Cubs in 1948. He sandwiched a two year Army stint around four seasons in the Cubs chain where he proved to be a power hitter who wasn't much for average or OBP. But a 20 homer, .264 average season at the Class A level in 1954 got him that shot with the '55 Cubs.

He spent 1956 with the Los Angeles Angels of the PCL and his 25-111-.300 stat line got him back to Wrigley in 1957. He played that year nearly full time in the Cubs lineup and hit .232 with 16 homers but the Cubs moved him to the Giants that off season for Bobby Thomson.

With San Francisco in '58 he had less that 100 at bats and a terrible start to the 1959 season resulted in a trip back to the minors, a move noted on the back of this card. He finished out that year at AA and retired. He was in the bowling business in his native Springfield, Missouri before starting up an insurance company with a partner.

What caused his short career after such a promising start? One theory, advanced on a Cubbie message board, alleges that NL opponents discovered he had a 'blind spot' and that was the end of his salad days. Maybe, maybe not. With all the ex-major leaguers who played against Speake in the PCL in 1956 one would think his numbers would of suffered as they had in Chicago after May of 1955.